MUNICH -- Imagine trying to pick up a pebble or scrape microbes off a cave wall in a bulky spacesuit with puffy gloves on, under a time constraint because you don't want to run out of oxygen. That's what the analog astronauts do daily at the HI-SEAS moonbase habitat in Hawaii as they prepare for future missions to the moon and Mars, says Michaela Musilova of the International MoonBase Alliance (IMA) and director of HI-SEAS, the Hawaii Space Exploration Analog and Simulation.

Musilova will present the latest on her team's research on Hawaiian lava tubes, and the challenges of trying to do research in spacesuits, this week at the European Geosciences Union (EGU) General Assembly 2021.

HI-SEAS is an analog lunar and Martian habitat and research station located high on the volcano Mauna Loa, on Hawaii's Big Island. There, researchers live and work for days to months at a time, only going outside to perform experiments or clamber about in lava tubes, and only in their hefty Extra-Vehicular Activity (EVA) analog spacesuits just as they would if they were on the moon or Mars. The 110-square-metre (1,200-square-foot) habitat is the astronauts' home, gym, lab--and everything else--while they're on a "mission."

"Doing research in suits under EVA constraints makes everything much more difficult to do, and it all takes three times longer," Musilova says. "We need to train extensively on Earth to figure out the best methods and create the best EVA suits so that we'll be able to perform this kind of research on the moon and Mars one day," she says.

The volcanic landscape of Mauna Loa is similar to what we see on the moon and Mars, says Bernard Foing, executive director of the International Lunar Exploration Working Group EuroMoonMars project. Foing is also part of IMA and will present research from the EuroMoonMars project explorations at HI-SEAS and several other sites, including Iceland, Chile's Atacama Desert, and the Utah desert, at the EGU meeting during the same session on Wednesday, 28 April. These analog locations allow the team "to test technologies we can send to space" and to test "training and capacity building for researchers and explorers," Foing says.

The HI-SEAS crewmembers--future astronaut candidates in training--are trying to figure out what works, and what doesn't work, here on Earth to prepare for future space missions. A crew at HI-SEAS runs a mission just like they would in space: crew roles include a commander, operations officer, engineer, and science communication officer, plus specialists for particular experiments or projects, like crew biologists to test for biofilms in lava tubes or to help run experiments like the recent LettuceGrow experiment, in which the team tested ways to grow lettuce inside the habitat.

Crew members, including people from all over the world from varying backgrounds and speaking different languages, spend all their time together during the mission, just as they would on the moon or Mars, Musilova says. "There is so much we still need to learn, including about how humans interact under these challenging conditions," she says. 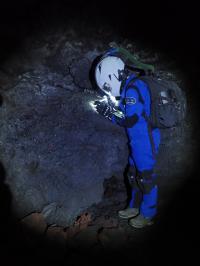