(Carlisle, Pa.) - Researchers from Dickinson College and the U.S. Geological Survey collaborated on field research to understand the ability of human searchers to detect the invasive brown treesnake (BTS) on the island of Guam. Due to their nocturnal and tree-dwelling habits, these snakes are extremely difficult to detect, especially when they are present at low densities in an area. A new study published in the January issue of Ecosphere helps explain why and provides valuable information on optimizing search methods and search locations that could be valuable if the BTS was accidentally introduced to a snake-free island.

In a study partially funded by the U.S. Navy, a team of researchers led by Scott Boback, associate professor of biology at Dickinson College, determined the precise location of snakes using radio telemetry in a 55-hectare forest on Guam, while a team of USGS scientists led by Robert Reed performed visual surveys at the same site. Boback and Reed say the synchronized combination of those techniques revealed where and how visual surveyors failed to detect some snakes. Because this study was performed on a low-density population after intensive snake control efforts, results provide rapid response teams with tools to improve detection during early invasions on nearby islands.

"By having a team perform independent visual surveys at the same time that another team was locating radio-tagged snakes, we were able to conclude that low detection rates are primarily due to snake behavior rather than searcher ability," Reed said. "Our findings about when and where snakes are detectable can then be used to target them more precisely during survey efforts."

Guam is a U.S. territory in the Pacific Ocean approximately 4,000 miles west of the Hawaiian Islands. Since arriving on the island accidentally around the time of World War II, the BTS has caused ecological devastation: it has contributed to the loss of 12 of 13 native forest bird species as well as several lizard and bat species. The snake has also caused millions of dollars of infrastructure damage due to electrical outages and has resulted in hospitalization of numerous infants due to snakebite.

According to Boback, research that improves detection and rapid response measures is key to preventing "Guam 2.0"--or the arrival of the BTS on nearby, snake-free islands. "What would happen if brown treesnakes got transported to nearby, snake-free islands is the nightmare no one wants to talk about," said Boback. "Prevention is the goal, but the spread of the BTS is an event for which preparedness and rapid response are critical."

Boback said the nearly certain "catastrophic cascading effect" of ecological imbalance caused by BTS arriving on nearby islands would include biodiversity loss, increased insect populations and economic loss from ecotourism. 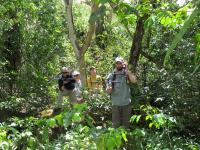