Unwanted blooms of Cladophora algae throughout the Baltic and in other parts of the world are not entirely without a positive side. A group of researchers at the Ångström Laboratory at Uppsala University have discovered that the distinctive cellulose nanostructure of these algae can serve as an effective coating substrate for use in environmentally friendly batteries. The findings have been published in an article in Nano Letters.

"These algae has a special cellulose structure characterised by a very large surface area," says Gustav Nyström, a doctoral student in nanotechnology and the first author of the article. "By coating this structure with a thin layer of conducting polymer, we have succeeded in producing a battery that weighs almost nothing and that has set new charge-time and capacity records for polymer-cellulose-based batteries."

Despite extensive efforts in recent years to develop new cellulose-based coating substrates for battery applications, satisfactory charging performance proved difficult to obtain. However, nobody had tried using algal cellulose. Researcher Albert Mihranyan and Professor Maria Strømme at the Nanotechnology and Functional Materials Department of Engineering Sciences at the Ångström Laboratory had been investigating pharmaceutical applications of the cellulose from Cladophora algae for a number of years. This type of cellulose has a unique nanostructure, entirely different from that of terrestrial plants, that has been shown to function well as a thickening agent for pharmaceutical preparations and as a binder in foodstuffs. The possibility of energy-storage applications was raised in view of its large surface area.

"We have long hoped to find some sort of constructive use for the material from algae blooms and have now been shown this to be possible," says Maria Strømme, Professor in Nanotechnology and leader of the research group. "The battery research has a genuinely interdisciplinary character and was initiated in collaboration with chemist professor Leif Nyholm. Cellulose pharmaceutics experts, battery chemists and nanotechnologists have all played essential roles in developing the new material."

The article in Nano Letters, in effect, introduces an entirely new electrode material for energy storage applications, consisting of a nanostructure of algal cellulose coated with a 50 nm layer of polypyrrole. Batteries based on this material can store up to 600 mA per cm3, with only 6 per cent loss through 100 charging cycles.

"Our success in obtaining a much higher charge capacity than was previously possible with batteries based on advanced polymers is primarily due to the extreme thinness of the polymer layer," says Gustav Nyström. 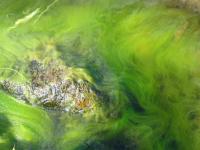