There is a 50 percent chance Lake Mead, a key source of water for millions of people in the southwestern United States, will be dry by 2021 if climate changes as expected and future water usage is not curtailed, according to a pair of researchers at Scripps Institution of Oceanography, UC San Diego.

Without Lake Mead and neighboring Lake Powell, the Colorado River system has no buffer to sustain the population of the Southwest through an unusually dry year, or worse, a sustained drought. In such an event, water deliveries would become highly unstable and variable, said research marine physicist Tim Barnett and climate scientist David Pierce.

Barnett and Pierce concluded that human demand, natural forces like evaporation, and human-induced climate change are creating a net deficit of nearly 1 million acre-feet of water per year from the Colorado River system that includes Lake Mead and Lake Powell. This amount of water can supply roughly 8 million people. Their analysis of Federal Bureau of Reclamation records of past water demand and calculations of scheduled water allocations and climate conditions indicate that the system could run dry even if mitigation measures now being proposed are implemented.

The paper, “When will Lake Mead go dry?,” has been accepted for publication in the peer-reviewed journal Water Resources Research, published by the American Geophysical Union (AGU), and is accessible via the AGU’s website (see instructions below).

“We were stunned at the magnitude of the problem and how fast it was coming at us,” said Barnett. “Make no mistake, this water problem is not a scientific abstraction, but rather one that will impact each and every one of us that live in the Southwest.”

“It’s likely to mean real changes to how we live and do business in this region,” Pierce added.

The Lake Mead/Lake Powell system includes the stretch of the Colorado River in northern Arizona. Aqueducts carry the water to Las Vegas, Los Angeles, San Diego, and other communities in the Southwest. Currently the system is only at half capacity because of a recent string of dry years, and the team estimates that the system has already entered an era of deficit.

“When expected changes due to global warming are included as well, currently scheduled depletions are simply not sustainable,” wrote Barnett and Pierce in the paper.

Barnett and Pierce note that a number of other studies in recent years have estimated that climate change will lead to reductions in runoff to the Colorado River system. Those analyses consistently forecast reductions of between 10 and 30 percent over the next 30 to 50 years, which could affect the water supply of between 12 and 36 million people.

The researchers add that even if water agencies follow their current drought contingency plans, it might not be enough to counter natural forces, especially if the region enters a period of sustained drought and/or human-induced climate changes occur as currently predicted.

Barnett said that the researchers chose to go with conservative estimates of the situation in their analysis, though the water shortage is likely to be more dire in reality. The team based its findings on the premise that climate change effects only started in 2007, though most researchers consider human-caused changes in climate to have likely started decades earlier. They also based their river flow on averages over the past 100 years, even though it has dropped in recent decades. Over the past 500 years the average annual flow is even less.

“Today, we are at or beyond the sustainable limit of the Colorado system. The alternative to reasoned solutions to this coming water crisis is a major societal and economic disruption in the desert southwest; something that will affect each of us living in the region” the report concluded.

Journalists and public information officers of educational and scientific institutions (only) who have registered with AGU for direct electronic access and received a username and password, can download a PDF copy of this paper by clicking on this link http://www.agu.org/journals/pip/wr/2007WR006704-pip.pdf

If you need instructions for downloading, please see http://www.agu.org/jinstructions.shtml.

Or, you may order an emailed copy of the paper by sending a message to Peter Weiss at pweiss@agu.org. Please provide your name, the name of your publication, and your phone number.

Scripps Institution of Oceanography, at UC San Diego, is one of the oldest, largest and most important centers for global science research and graduate training in the world. The National Research Council has ranked Scripps first in faculty quality among oceanography programs nationwide. Now in its second century of discovery, the scientific scope of the institution has grown to include biological, physical, chemical, geological, geophysical and atmospheric studies of the earth as a system. Hundreds of research programs covering a wide range of scientific areas are under way today in 65 countries. The institution has a staff of about 1,300, and annual expenditures of approximately $140 million from federal, state and private sources. Scripps operates one of the largest U.S. academic fleets with four oceanographic research ships and one research platform for worldwide exploration. 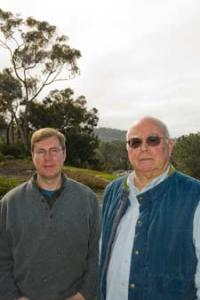