In 2001, the famous herpetologist Joseph B. Slowinski died from snakebite by an immature black-and-white banded krait, while leading an expedition team in northern Myanmar. The very krait that caused his death is now confirmed to belong to the same species identified as a new to science venomous snake, following an examination of samples collected between 2016 and 2019 from Yingjiang County, Yunnan Province, China.

The new krait species, found in Southwestern China and Northern Myanmar, is described by Dr Zening Chen of Guangxi Normal University, PhD candidate Shengchao Shi, Dr Li Ding from the Chengdu Institute of Biology at the Chinese Academy of Sciences, Dr Gernot Vogel of the Society for Southeast Asian Herpetology in Germany and Dr Jingsong Shi of the Institute of Vertebrate Paleontology and Paleoanthropology at Chinese Academy of Sciences. Their study is published in the open-access, peer-reviewed journal ZooKeys.

The researchers decided to name the new species Bungarus suzhenae - Suzhen's krait, after the mythical figure of Bai Su Zhen - a powerful snake goddess from the traditional Chinese myth 'Legend of White Snake'.

The legend says that, after thousands of years of practicing magic power, the white snake Bai Su Zhen transformed herself into a young woman and fell in love with the human man Xu Xian. Together, they ran a hospital, saving lots of human lives with medicine and magic. However, this love between goddess and human was forbidden by the world of the gods and, eventually, Bai Su Zhen was imprisoned in a tower for eternity. Since then, the Chinese regard her as a symbol of true love and good-heartedness.

"The black-and-white banded krait is one of the snakes most similar to the white snake in nature, so we decided to name it after Bai Su Zhen," say the authors.

In fact, the discovery of Suzhen's krait was inspired by another accident from 2015, when the Chinese herpetologist Mian Hou was bitten by a black-and-white banded krait in Yingjiang. "It hurt around the wound, and the skin around it turned dark," said the unfortunate man, who luckily survived.

The authors of the present study realized that the bite was different from those of the many-banded krait B. multicinctus, which go without clear symptoms or pain around the wound. This clue eventually led to the discovery of Suzhen's krait.

Because kraits are highly lethal, understanding their species diversity and geographic distribution is vital for saving human lives. Thanks to adequate description and classification of deadly snakes, research on venom, antivenom development and proper snakebite treatment can advance more rapidly.

The new study makes it easier to distinguish between krait species from China and adjacent southeastern Asia. "Three species of the black-and-white banded kraits from China were previously put under the same name - many-banded krait, which would hinder appropriate medical treatment," the authors point out. Additionally, they suggest that antivenom for the many-banded krait be reevaluated accordingly. 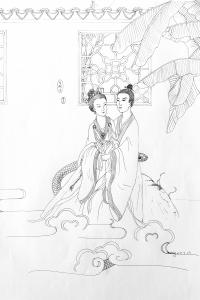 Illustration of the Legend of the White Snake