"I have a slide that has a photo of a cornfield and a big photovoltaic array," says Robert Blankenship, a scientist who studies photosynthesis at Washington University in St. Louis. "When I give talks I often ask the audience which one is more efficient. Invariably the audience votes overwhelmingly in favor of photosynthesis. "

This question and its surprising answer (below) is the point of departure for a provocative article published in the May 13 issue of Science. The article is the outgrowth of a Department of Energy workshop comparing the efficiency of plants and solar cells, a topic Blankenship, a member of the DOE's Council and Biochemical Sciences, had suggested.

"We assembled a team of distinguished biologists, chemists, physicists and solid-state scientists and met in Albuquerque in May 2009 to hash everything out," says Blankenship, PhD, the Lucille P. Markey Distinguished Professor of Arts and Sciences in the departments of biology and chemistry. "It turned out that we knew a lot, but what we knew existed in two parallel universes," he says.

"The paper tries to resolve the long-standing controversy over the efficience of photosynthesis," says David M. Kramer, PhD, the Hannah Professor of Biochemistry and Molecular Biology at Michigan State University and one of the co-authors. "The efficiency of photosynthesis, and our ability to improve it, is critcal to whether the entire biofuels industry is viable."

Which is more efficient?

The question really isn't a fair one unless efficiency is first defined. At a bare minimum it isn't fair to compare plants that package the sun's energy in handy little stored-fuel packages (carbon-based molecules) to photovoltaics that just take the first step of converting the sun's energy to jazzed-up electrons.

Fairer would be to compare plants to photovoltaic arrays that also store energy in chemical bonds. So the experts did their calculations on a photovoltaic array wired to an electrolyzer that used electricity from the array to split water into hydrogen and oxygen. The free energy needed to split water is essentially the same as that needed for a plant to form carbohydrate, so the comparison is even-handed.

If those are the terms, then the annual averaged efficiency of photovoltaic-driven electrolysis is about 10 percent. Solar energy conversion efficiencies for crop plants, on the other hand, are typically about 1 percent, although yields of 2 percent to 4 percent have been reported for crop plants, and microalgae grown in bioreactors might do a bit better still.

The point of the comparison, Blankenship stresses, is not to make us throw plants on the compost pile. For one thing, efficiency is only one consideration among many in the choice among energy technologies. More important, certainly, are life-cycle costs, the capital cost and valuation of the environmental impact of a product from its creation to its destruction.

Still the comparison clears away the cobwebs of misconception and serves as a useful goad. It led the scientists in Albuquerque to ask why plants are so inefficient and what can be done to improve their efficiency.

He cites the analogy of teosinte, a grass native to Central America that is thought to be the ancestor of corn.

"You couldn't feed yourself very well off that stuff," Blankenship says. The giant ear and juicy kernels are things people imposed on corn to make it suitable for our needs.

"I think the same sort of thing will go on with bioenergy," he says. We've bred plants for food production, not for energy storage, and the two things are not the same."

But to shape plants for energy production, scientists will have to deal with what Blankenship calls legacy biochemistry: once functional aspects of biology that now get in the way of efficient energy production.

Blankenship cites two examples from the paper by way of illustrating the problem. The first is light saturation.

With so many pigments absorbing light energy, the capacity of the photosynthetic apparatus to process the energy is quickly exceeded. In leaves in full sun, up to 80 percent of the absorbed energy must be dumped to avoid its diversion into toxic chemical reactions that could damage or even kill the plant.

"So," says Blankenship, "if you look at a graph of light intensity versus energy output, the photovoltaic graph is completely linear. If you put in twice as much light, you get out twice as much energy over orders of magnitude. It's sort of amazing that way.

"The photosynthetic system, on the other hand, starts out linear and then very quickly bends over and saturates. What that means is the efficiency of plants changes during the day. They start with fairly high efficiency in the morning but by noontime, they're saturated and are dumping most of the energy."

Why do plants bite off more than they can chew?

"We've asked ourselves that question lots of time," he says.

It might be that the plant is hogging all the light not because it needs it all but because it prevents neighboring plants from using it and outgrowing the plant.

In any case, to address light saturation, some labs are truncating the antennae. "You can block the biosynthesis of some types of pigments or cut out the genes for a particular antenna complex, " Blankenship explains.

"Some labs say they do actually get a higher efficiency and in other cases they seem not to, so this is really an open research area," he says.

After the light reactions comes the Calvin-Benson cycle, where carbon dioxide pulled from the air is incorporated into carbon compounds (sugars) already present in the chloroplast.

This reaction is carried out by an enzyme called RuBisCO (Ribulose bisphosphate carboxylase-oxygenase), said to be the most abundant protein on Earth.

But, as an enzyme, RuBisCO has an Achilles heel. It can react with oxygen as well as with carbon dioxide.

"It's actually more reactive to carbon dioxide than to oxygen, Blankenship says, but you've got 21 percent oxygen in the atmosphere and only about 0.038 percent carbon dioxide, " so in that numbers game, oxygen sometimes wins.

"If RuBisCO reacts with carbon dioxide, it adds another carbon to a sugar and everything is fine," says Blankenship. "If it reacts with oxygen, then it goes through a long, complicated and energy-expensive process called photorespiration just to recover the carbon and get it back to the starting line."

Photorespiration (a completely different process than respiration, which is as necessary to plants as it is to people) is something of a biological mystery because it seems so counterproductive for the plant.

It may just be evolutionary baggage, says Blankenship. "RuBisCO seems to work pretty well in an anaerobic environment where there's no oxygen, and that suggests it is a relict from an earlier time, when the atmosphere had little oxygen and more carbon dioxide, and the inability of the enzyme's active site to exclude oxygen may have made no difference."

One quick fix is to feed flue gas from coal-fired power plants into algal farms. The concentration of carbon dioxide in flue gas is typically 10 percent, high enough to suppress photorespiration and patch over the RuBisCO problem.

A more complicated fix is to borrow some chemistry from a small group of plants that do things differently. Most plants use a photosynthetic process known as C3 (because the produce of the carbon dioxide fixation process is a three-carbon molecule) but a few, including tropical grasses, corn and sugarcane, use an alternative known as C4 (because the added carbon produces a four-carbon sugar).

C4 plants use an enzyme that has a high affinity for carbon dioxide (in the charged form of bicarbonate) and none for oxygen to temporarily fix carbon dioxide in a four-carbon molecule. This molecule releases carbon dioxide at high concentrations near RuBisCO, substantially reducing photorespiration.

Most plants are C3 plants, says Blankenship. But the C4 workaround is present in many different lineages of plants. It seems to have evolved multiple times because it is so beneficial.

Labs are also trying to put C4 pathways into C3 plants to make them more efficient. "They're making progress on it," Blankenship says, "but it's a complicated thing to try to do."

Some factors that limit the efficiency of natural photosynthetic systems are intrinsic to the basic structure and organization of the photosynthetic apparatus and would require a major re-engineering to improve.

The experts are nonetheless hopeful. As the example of teosinte shows, plants were modified almost beyond recognition when people changed the selection criteria from reproductive success for the plant to food production for people. Similar transformations might take place if people begin to select plants for maximal energy production and storage.

Nor would we be limited, as in the case of teosinte, to the slow, blind process of manipulating a plant's genome by selecting the best-looking mature plants to cross.

Genetic engineering and the more aggressive techniques of synthetic biology — the marriage of biology and engineering to design and construct systems and metabolic pathways not found in nature — should speed things up considerably.

The experts suggested, for example, replacing one of the two photosystems in plants that handle the light-dependent reactions with a photosystem from a species of photosyntheic bacteria. The photosystems in most plants compete for the same piece of the solar spectrum, cutting the energy efficiency nearly in half, but some bacteria absorb light from an entirely different part of the spectrum.

"It would be the biological equivalent of a tandem photovoltaic cell," Blankenship says enthusiastically, "and those can have very high efficiencies."

"We have identified many of the important inefficiencies that arise from the basic design of photosynthesis and have suggested ways to reengineer photosynthesis to improve its ability to meet human energy needs," says Thomas A. Moore, PhD, Regents' Professor in the department of chemistry and biochemistry at Arizona State University and another of the co‑authors. "These improvements to photosynthesis go beyond the incremental steps practiced since agriculture began thousands of years ago." 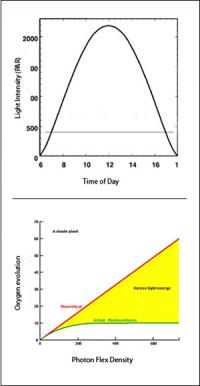