NASA's newest planet hunter, the Transiting Exoplanet Survey Satellite (TESS), is now providing valuable data to help scientists discover and study exciting new exoplanets, or planets beyond our solar system. Part of the data from TESS's initial science orbit includes a detailed picture of the southern sky taken with all four of the spacecraft's wide-field cameras. This "first light" science image captures a wealth of stars and other objects, including systems previously known to have exoplanets.

"In a sea of stars brimming with new worlds, TESS is casting a wide net and will haul in a bounty of promising planets for further study," said Paul Hertz, astrophysics division director at NASA Headquarters in Washington. "This first light science image shows the capabilities of TESS's cameras, and shows that the mission will realize its incredible potential in our search for another Earth."

TESS acquired the image using all four cameras during a 30-minute period on Tuesday, Aug. 7. The black lines in the image are gaps between the camera detectors. The images include parts of a dozen constellations, from Capricornus to Pictor, and both the Large and Small Magellanic Clouds, the galaxies nearest to our own. The small bright dot above the Small Magellanic Cloud is a globular cluster -- a spherical collection of hundreds of thousands of stars -- called NGC 104, also known as 47 Tucanae because of its location in the southern constellation Tucana, the Toucan. Two stars, Beta Gruis and R Doradus, are so bright they saturate an entire column of pixels on the detectors of TESS's second and fourth cameras, creating long spikes of light.

"This swath of the sky's southern hemisphere includes more than a dozen stars we know have transiting planets based on previous studies from ground observatories," said George Ricker, TESS principal investigator at the Massachusetts Institute of Technology's (MIT) Kavli Institute for Astrophysics and Space Research in Cambridge.

TESS's cameras, designed and built by MIT's Lincoln Laboratory in Lexington, Massachusetts, and the MIT Kavli Institute, monitor large swaths of the sky to look for transits. Transits occur when a planet passes in front of its star as viewed from the satellite's perspective, causing a regular dip in the star's brightness.

TESS will spend two years monitoring 26 such sectors for 27 days each, covering 85 percent of the sky. During its first year of operations, the satellite will study the 13 sectors making up the southern sky. Then TESS will turn to the 13 sectors of the northern sky to carry out a second year-long survey.

TESS builds on the legacy of NASA's Kepler spacecraft, which also uses transits to find exoplanets. TESS's target stars are 30 to 300 light-years away and about 30 to 100 times brighter than Kepler's targets, which are 300 to 3,000 light-years away. The brightness of TESS's targets make them ideal candidates for follow-up study with spectroscopy, the study of how matter and light interact.

The James Webb Space Telescope and other space and ground observatories will use spectroscopy to learn more about the planets TESS finds, including their atmospheric compositions, masses and densities.

"We were very pleased with the number of guest investigator proposals we received, and we competitively selected programs for a wide range of science investigations, from studying distant active galaxies to asteroids in our own solar system," said Padi Boyd, TESS project scientist at NASA's Goddard Space Flight Center in Greenbelt, Maryland. "And of course, lots of exciting exoplanet and star proposals as well. The science community are chomping at the bit to see the amazing data that TESS will produce and the exciting science discoveries for exoplanets and beyond."

TESS launched from NASA's Kennedy Space Center in Cape Canaveral, Florida, on April 18 aboard a SpaceX Falcon 9 rocket and used a flyby of the Moon on May 17 to head toward its science orbit. TESS started collecting scientific data on July 25 after a period of extensive checks of its instruments. 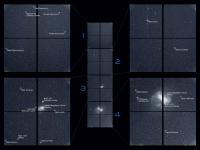