You might not think much about pea aphids, but it turns out they've got skills enough to get aerospace engineers excited. A report in the February 4th issue of Current Biology, a Cell Press publication, shows that the insects can free fall from the plants they feed on and—within a fraction of a second—land on their feet every time. Oftentimes, the falling aphids manage to cling to a lower part of the plant by their sticky feet on the way down, avoiding the dangerous ground altogether.

That's despite the fact that most aphids in a colony are wingless and have no special body surfaces to turn themselves right-side up. Rather, high-speed video analysis shows that they hold their bodies and limbs in a special posture, which allows them to passively rotate and then stay in a back-up, feet-down position.

"Animals are capable of performing remarkable tasks to maximize their chances of survival," said Gal Ribak from the Technion-Israel Institute of Technology's aerospace engineering department. "There is ample data on biochemical, physiological, and behavioral adaptations, but comparative biomechanics tells us that creatures exploit the laws of physics to their advantage just as well."

It was Moshe Gish and Moshe Inbar from the University of Haifa who first noticed the behavior. Gish was studying the aphid dropping behavior in response to the breath of mammalian herbivores when he noticed that, during the entire (very brief) descent of the insects, he only saw their backs. This suggested that the aphids almost always landed upright. To verify his suspicion, Gish dropped aphids on cardboard covered with a thin layer of red powder. Sure enough, almost all of the aphids showed a clear red spot on their abdomens.

The researchers enlisted Ribak , a biomechanics researcher, and aerospace engineer Daniel Weihs to investigate further. After watching hundreds of movies starring the aphids and their natural ladybug (ladybird) predators, they determined that the aphids land on their feet 96 percent of the time.

"What puzzled us was that the aphids did not seem to do much in order to right themselves," Ribak said. "Their body posture remained fairly constant during the entire fall."

Mathematical models showed that the air resistance on the aphids' appendages rotates their bodies as they fall through air regardless of their starting orientation. "This is what aerodynamicists call 'static longitudinal stability,' one of the things that an aircraft engineer needs to think about when designing a plane," Ribak explained.

Those acrobatic feats are a matter of life and death for the aphids, added Gish. "Aphids that are confronted with an attacking predator are caught between the devil and the deep blue sea." If they stay put, they may be gobbled up by predators, and if they drop to the ground, they may get lost and starve to death or fall prey to someone else. Time to stop, drop, and roll.

The impressive aerial maneuvers of the pea aphid 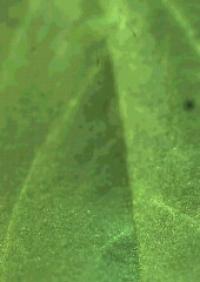 The Impressive Aerial Maneuvers of the Pea Aphid (2 of 3)

The Impressive Aerial Maneuvers of the Pea Aphid (3 of 3)