As NASA satellites gather data on the first major hurricane of the Eastern Pacific Ocean hurricane season, Blas continues to hold onto its Category 3 status on the Saffir Simpson Wind Scale.

On July 6 at 2155 UTC (5:55 p.m. EDT) NASA-NOAA-DOD's Suomi NPP satellite captured a visible light image of Hurricane Blas in the eastern Pacific Ocean. The image showed that Blas maintained a large eye with bands of powerful thunderstorms wrapping into the low-level center of circulation from the east.

On July 6 at 2122 UTC (5:22 p.m. EDT), the AIRS or Atmospheric Infrared Sounder instrument aboard NASA's Aqua satellite captured an infrared view of Blas' cloud top temperatures, revealing powerful storms around the eye. By July 7, the National Hurricane Center (NHC) reported that the eye had become a little less distinct in the morning, and the surrounding ring of deep convection has warmed over the northwestern portion of the circulation. When cloud top temperatures warm that means they are not extending as high in the troposphere and indicate that the uplift of air is weakening.

At 11 a.m. EDT (1500 UTC) on July 7, the center of Hurricane Blas was located near latitude 16.2 North, longitude 127.1 West. That's about 1,210 miles (1,945 km) west-southwest of the southern tip of Baja California, Mexico. Blas was moving toward the west-northwest near 10 mph (17 kph), and the NHC said this motion is expected to continue through today. A turn toward the northwest is forecast on Friday.

Maximum sustained winds have decreased to near 120 mph (195 kph). NHC forecasts a weakening trend over the next two days and Blas is expected to weaken to a tropical storm by Friday night. For updated forecasts, visit the NHC website: http://www.nhc.noaa.gov. 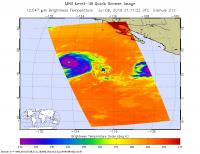