Since in 2006 an unknown leafmining moth was found in North Italian vineyards by Mario Baldessari and colleagues, often in great numbers, scientists have tried to put a name to this apparently new invader. Italian scientists from the Fondazione Edmund Mach di San Michele all'Adige and the Università di Padova turned for help to taxonomists in the Netherlands and United States. The new species was described in the open access journal ZooKeys.

The family to which the moth belongs, the shield bearing leafminers (Heliozelidae) appeared to be poorly studied in North America, discovered Erik J. van Nieukerken of NCB Naturalis (Leiden, Netherlands) and David L. Wagner of the University of Connecticut (Storrs, USA). Together with the Italian scientists they studied the life history, morphology and DNA barcodes of the new species and related leafminers.

"When we analysed the DNA barcodes, we found many more species than we knew to exist on grape and related plants in North America" said Erik van Nieukerken. With some difficulty the four known species could be matched to species recognised by DNA. That left our species and some others without a name. The new species, baptised Antispila oinophylla (literally: the moth with the opposite spots of the wine (grape) leaves), was previously confused with a North American species that feeds on Virginia creeper.

The new species occurs in eastern North America from Georgia north to Ontario, and feeds as larva on several species of wild grapes. In this area it seems to be the commonest species of this family on wild grapes. The larva eats out typical leafmines, and cuts out a shield at the end of the mine, leaving a characteristic hole in the leaf behind when it walks down the plant in search for a pupation site. The moth only measures about 5-6 mm wingspan, or 3 mm length at rest, and is blackish, with shining silvery spots and head.

In Italy the species was found in vineyards in the Trento and Veneto regions since 2006, and reaching high levels of infestation during the last years. The Italian authors of this paper studied the distribution and life history in detail: the leafminer apparently has a good taste and prefers the leaves of Chardonnay, Cabernet Sauvignon and Muscat grapes. Local outbreaks can probably result in economic damage. Parasitic wasps may be the best remedy to control the populations of this pest.

It is unknown how this species has reached Europe. The small shields with larvae or pupae, attach to all sorts of material, trunks, stakes, but also debris, and could easily be transported in this way: they will survive a long time at low temperatures. Even adults could have been transported in airplanes or cargo on ships. Invasions such as this are becoming more and more common. Knowledge of the correct taxonomy opens knowledge to the life history, distribution and natural enemies of invasive species.

Taxonomic knowledge of such insects unfortunately is often insufficient, and the authors plea to study such insects taxonomically before they become a problem. 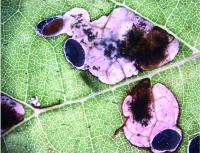