The epic ocean-spanning journeys of the gigantic leatherback turtle in the South Atlantic have been revealed for the first time thanks to groundbreaking research using satellite tracking.

Experts at the Centre for Ecology and Conservation (Cornwall) at the University of Exeter led a five-year study to find out more about these increasingly rare creatures and inform conservation efforts.

The research, published in the Proceedings of the Royal Society B today [5th January 2011], has shed new light on the little-known migration behaviour of these animals – following their movement from the world's largest breeding colony in Gabon, Central Africa, as they returned to feeding grounds across the South Atlantic.

The research has been carried out with the help of Parcs Gabon, the Wildlife Conservation Society (WCS), PTMG (Marine Turtle Partnership for Gabon), the Trans-Atlantic Leatherback Conservation Initiative (TALCIN) - a multi-partner effort coordinated by WWF, and SEATURTLE.org

Out of 25 females studied in the new research, three migratory routes were identified – including one 7,563km (4,699 mile) journey straight across the South Atlantic from Africa to South America.

Other routes still involved large distances, as they moved from Gabon to food-rich habitats in the southwest and southeast Atlantic and off the coast of Central Africa. They will stay in these areas for 2-5 years to build up the reserves to reproduce, when they will return to Gabon once again.

Dr Matthew Witt said: "Despite extensive research carried out on leatherbacks, no-one has really been sure about the journeys they take in the South Atlantic until now. What we've shown is that there are three clear migration routes as they head back to feeding grounds after breeding in Gabon, although the numbers adopting each strategy varied each year. We don't know what influences that choice yet, but we do know these are truly remarkable journeys – with one female tracked for thousands of miles travelling in a straight line right across the Atlantic."

In the Pacific ocean, leatherback turtles have seen a precipitous decline over the past three decades – with one nesting colony in Mexico declining from 70,000 in 1982 to just 250 by 1998-9*. The exact cause of the dramatic fall-off in numbers is not clear, but turtle egg harvesting, coastal gillnet fishing, and longline fishing have been identified as potential factors.

In the Atlantic, population levels have been more robust but, due to variations in numbers at nesting sites each year, it's not clear whether they are in decline. Conservationists are keen to take action now to avoid a repeat of the Pacific story.

Dr Brendan Godley said the new research would be vital for informing this conservation strategy: "All of the routes we've identified take the leatherbacks through areas of high risk from fisheries, so there's a very real danger to the Atlantic population. Knowing the routes has also helped us identify at least 11 nations who should be involved in conservation efforts, as well as those with long-distance fishing fleets. There's a concern that the turtles we tracked spent a long time on the High Seas, where it's very difficult to implement and manage conservation efforts, but hopefully this research will help inform future efforts to safeguard these fantastic creatures."

Dr. Howard Rosenbaum, Director of the Wildlife Conservation Society's Ocean Giants Program, said: "This important work shows that protecting leatherback turtles—the ancient mariners of our oceans—requires research and conservation on important nesting beaches, foraging areas and important areas of the high seas. Armed with a better understanding of migration patterns and preferences for particular areas of the ocean, the conservation community can now work toward protecting leatherbacks at sea, which has been previously difficult."

The research was carried out with the financial support of a range of donors, including the Natural Environment Research Council (NERC, UK), the Darwin Initiative, the Large Pelagics Research Center (LPRC, USA) Competitive Grants Program, and the European Association of Zoos & Aquaria (EAZA) Shellshock Campaign.

The paper, called Tracking leatherback turtles from the world's largest rookery: assessing threats across the South Atlantic, can be viewed online in Proceedings of the Royal Society B from today.

Previous research in the South Atlantic has suggested that longline fishing will by-catch one turtle for every 1,000 hooks places in the water, although this does not necessarily mean the turtle will die. The same research showed there are on average 1,300 hooks on each longline. (Alvar Carranza, Andres Domingo, Andres Estrades; Pelagic longlines: A threat to sea turtles in the Equatorial Eastern Atlantic; Biological Conservation 131 (2006) 52-57).

Gillnet fishing occurs around coastal areas. Turtles caught in these nets have a low chance of survival. 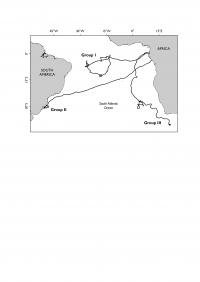