In findings published Aug. 6 in the journal Current Biology, researchers from New Jersey Institute of Technology (NJIT), Chinese Academy of Sciences and University of Rennes in France have unveiled a stunning 99-million-year-old fossil pristinely preserving an enigmatic insect predator from the Cretaceous Period -- a 'hell ant' (haidomyrmecine) -- as it embraced its unsuspecting final victim, an extinct relative of the cockroach known as Caputoraptor elegans.

The ancient encounter, locked in amber recovered from Myanmar, offers a detailed glimpse at a newly identified prehistoric ant species Ceratomyrmex ellenbergeri, and presents some of the first direct evidence showing how it and other hell ants once used their killer features -- snapping their bizarre, but deadly, scythe-like mandibles in a vertical motion to pin prey against their horn-like appendages.

Researchers say the rare fossil demonstrating the hell ant's feeding mode offers a possible evolutionary explanation for its unusual morphology and highlights a key difference between some of the earliest ant relatives and their modern counterparts, which today uniformly feature mouthparts that grasp by moving together laterally. The hell ant lineage, along with their striking predatory traits, are suspected to have vanished along with many other early ant groups during periods of ecological change around the Cretaceous-Paleogene extinction event 65 million years ago.

"Fossilized behavior is exceedingly rare, predation especially so. As paleontologists, we speculate about the function of ancient adaptations using available evidence, but to see an extinct predator caught in the act of capturing its prey is invaluable," said Phillip Barden, assistant professor at NJIT's Department of Biological Sciences and lead author of the study. "This fossilized predation confirms our hypothesis for how hell ant mouthparts worked ... The only way for prey to be captured in such an arrangement is for the ant mouthparts to move up and downward in a direction unlike that of all living ants and nearly all insects."

"Since the first hell ant was unearthed about a hundred years ago, it's been a mystery as to why these extinct animals are so distinct from the ants we have today," Barden added. "This fossil reveals the mechanism behind what we might call an 'evolutionary experiment,' and although we see numerous such experiments in the fossil record, we often don't have a clear picture of the evolutionary pathway that led to them."

Barden's team suggests that adaptations for prey-capture likely explain the rich diversity of mandibles and horns observed in the 16 species of hell ants identified to date. Some taxa with unarmed, elongate horns such as Ceratomyrmex apparently grasped prey externally, while other hell ants such as Linguamyrmex vladi, or "Vlad the Impaler" discovered by Barden and colleagues in 2017, was thought to have used a metal-reinforced horn on its head to impale prey -- a trait potentially used to feed on the internal liquid (hemolymph) of insects.

Barden says the earliest hell ant ancestors would have first gained the ability to move their mouthparts vertically. This, in turn, would functionally integrate the mouthparts and head in a way that was unique to this extinct lineage.

"Integration is a powerful shaping force in evolutionary biology ... when anatomical parts function together for the first time, this opens up new evolutionary trajectories as the two features evolve in concert," explained Barden. "The consequences of this innovation in mouthpart movement with the hell ants are remarkable. While no modern ants have horns of any kind, some species of hell ant possess horns coated with serrated teeth, and others like Vlad are suspected to have reinforced its horn with metal to prevent its own bite from impaling itself."

To explore further, the researchers compared the head and mouthpart morphology of Ceratomyrmex and several other hell ant species (such as head, horn and mandible size) with similar datasets of living and fossil ant species. The team also conducted a phylogenetic analysis to reconstruct evolutionary relationships among both Cretaceous and modern ants. The team's analyses confirmed that hell ants belong to one of the earliest branches of the ant evolutionary tree and are each other's closest relatives. Moreover, the relationship between mandible and head morphology is unique in hell ants compared to living lineages as a result of their specialized prey-capture behavior. The analyses also demonstrated that elongated horns evolved twice in hell ants.

While the fossil has finally provided Barden's lab with firmer answers as to how this long-lost class of ant predators functioned and found success for nearly 20 million years, questions persist such as what led these and other lineages to go extinct while modern ants flourished into the ubiquitous insects we know today. Barden's team is now seeking to describe species from new fossil deposits to learn more about how extinction impacts groups differentially.

"Over 99% of all species that have ever lived have gone extinct," said Barden. "As our planet undergoes its sixth mass extinction event, it's important that we work to understand extinct diversity and what might allow certain lineages to persist while others drop out. I think fossil insects are a reminder that even something as ubiquitous and familiar as ants have undergone extinction." 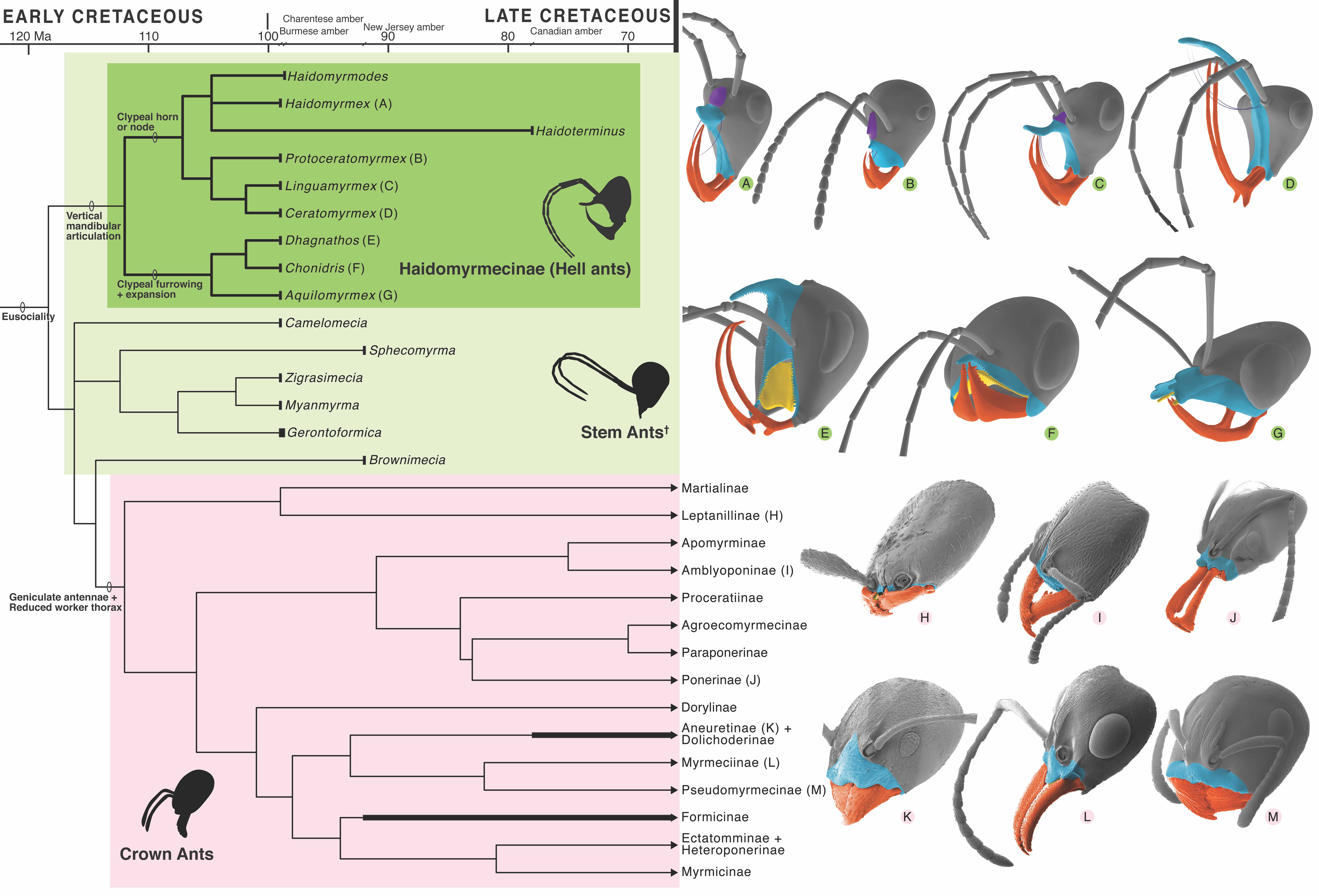