Menlo Park, Calif. — Through innovations to a printing process, researchers have made major improvements to organic electronics – a technology in demand for lightweight, low-cost solar cells, flexible electronic displays and tiny sensors. The printing method is fast and works with a variety of organic materials to produce semiconductors of strikingly higher quality than what has so far been achieved with similar methods.

Organic electronics have great promise for a variety of applications, but even the highest quality films available today fall short in how well they conduct electrical current. The team from the U.S. Department of Energy's (DOE) SLAC National Accelerator Laboratory and Stanford University have developed a printing process they call FLUENCE—fluid-enhanced crystal engineering—that for some materials results in thin films capable of conducting electricity 10 times more efficiently than those created using conventional methods.

"Even better, most of the concepts behind FLUENCE can scale up to meet industry requirements," said Ying Diao, a SLAC/Stanford postdoctoral researcher and lead author of the study, which appeared today in Nature Materials.

Stefan Mannsfeld, a SLAC materials physicist and one of the principal investigators of the experiment, said the key was to focus on the physics of the printing process rather than the chemical makeup of the semiconductor. Diao engineered the process to produce strips of big, neatly aligned crystals that electrical charge can flow through easily, while preserving the benefits of the "strained lattice" structure and "solution shearing" printing technique previously developed in the lab of Mannsfeld's co-principal investigator, Professor Zhenan Bao of the Stanford Institute for Materials and Energy Sciences, a joint SLAC-Stanford institute.

To make the advance, Diao focused on controlling the flow of the liquid in which the organic material is dissolved. "It's a vital piece of the puzzle," she said. If the ink flow does not distribute evenly, as is often the case during fast printing, the semiconducting crystals will be riddled with defects. "But in this field there's been little research done on controlling fluid flow."

Diao designed a printing blade with tiny pillars embedded in it that mix the ink so it forms a uniform film. She also engineered a way around another problem: the tendency of crystals to randomly form across the substrate. A series of cleverly designed chemical patterns on the substrate suppress the formation of unruly crystals that would otherwise grow out of alignment with the printing direction. The result is a film of large, well-aligned crystals.

X-ray studies of the group's organic semiconductors at the Stanford Synchrotron Radiation Lightsource (SSRL) allowed them to inspect their progress and continue to make improvements, eventually showing neatly arranged crystals at least 10 times longer than crystals created with other solution-based techniques, and of much greater structural perfection.

The group also repeated the experiment using a second organic semiconductor material with a significantly different molecular structure, and again they saw a notable improvement in the quality of the film. They believe this is a sign the techniques will work across a variety of materials.

Principal investigators Bao and Mannsfeld say the next step for the group is pinning down the underlying relationship between the material and the process that enabled such a stellar result. Such a discovery could provide an unprecedented degree of control over the electronic properties of printed films, optimizing them for the devices that will use them.

"That could lead to a revolutionary advance in organic electronics," Bao said. "We've been making excellent progress, but I think we're only just scratching the surface."

Other study co-authors included researchers from Stanford University's departments of chemistry and chemical and electrical engineering and Nanjing University. The research was supported by the SLAC's Laboratory Directed Research and Development program. SSRL is a national user facility operated by Stanford University on behalf of the DOE's Office of Science.

Also on the Web:

Micropillars Embedded in the Shearing Blade 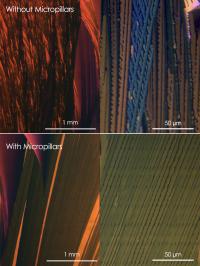 Before and After Micropillars