(Santa Barbara, Calif.) — Like tiny construction workers, cells sculpt embryonic tissues and organs in 3D space. This task is complicated and requires constant communication between cells to coordinate their actions and generate the forces that will shape their environment into complex tissue morphologies.

Biologists have long studied the communication between cells and their behavior while building these structures, but until now, it had not been possible to see the forces cells generate to shape them. A new method to quantify the mechanical forces that cells exert while building tissues and organs can help answer long unresolved questions in biology and provide new diagnostic tools for medicine.

Developed initially in the Wyss Institute at Harvard University by Otger Campàs and Donald Ingber, this technique is the first of its kind to measure the mechanical forces that cells generate in living embryos. Now an assistant professor who holds the Mellichamp Chair in Systems Biology at UC Santa Barbara, Campàs leads a lab that is developing this droplet technique in several new directions, and applying it to discover the patterns of cellular forces that shape embryonic structures in fish and chicken.

"There is a lot of interest in understanding how genetics and mechanics interplay to shape embryonic tissues," said Campàs. "I believe this technique will help many scientists explore the role that mechanical forces play in morphogenesis and, more generally, in biology."

So far, the vast majority of knowledge on how cellular forces affect cell behavior has come from cells studied in vitro — through cultures that isolate cells from their natural environment. Using soft gel substrates or gel matrices, researchers have been able to measure the traction forces of these cells moving in a petri dish. However, almost nothing is known about the forces that cells generate while sculpting embryonic tissues and organs, and how these affect cell behavior in their natural environment.

"In general, cells behave in a different way inside an embryo than in a dish," Campàs said. Some behaviors may be similar, but many others are not. Depending on the environment, cells respond in a variety of ways, he added.

"It has not been possible to demonstrate a direct causal relationship between mechanics and behavior in vivo because we previously had no way to directly quantify force levels at specific locations in 3D living tissues," said Donald Ingber, director of the Wyss Institute for Biologically Inspired Engineering at Harvard. "This method now allows us to make these measurements, and I hope it will bring mechanobiology to a new level."

To measure these miniscule forces, Campàs and Ingber, used tiny droplets of a special, flour-based oil. Once stabilized and with controlled surface tension, the droplet's surface chemistry is modified to allow for the adhesion of living cells. It is also fluorescently labeled to allow observers to see its shape. When cells push and pull on an oil droplet, they deform it, and this deformation provides a direct read-out of the forces they exert.

Using this technique, Campàs and Ingber showed that it is possible to measure cellular forces in different conditions, such as 3D cellular aggregates or in living mouse mandibles. Research findings for this work are published in the advance online version of the journal Nature Methods.

This method can help answer questions that biologists have been trying to answer for decades: What are the forces that cells generate to sculpt embryonic tissues and organs? And how do these forces affect cell behavior and gene expression in the cell's natural environment, the living embryo?

"Understanding how cells shape embryonic structures requires measuring the patterns of cellular forces while the structure is being built," said Campàs. "If you take the cells out of the embryo and put them in a dish, you don't have the tissue or organ structure anymore."

The knowledge gained by the ability to observe the behavior of developing cells as they mature could lead to further knowledge regarding a wide variety of conditions including birth defects or tumor growth and metastasis. Moreover, this method can also provide insight into diseases in which imbalances in forces exerted by tissues' constituent cells are an issue, according to Ingber.

May the cellular force be with you

A 3-D Reconstruction of a Droplet Deformed by Cellular Forces 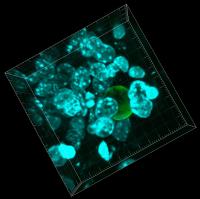 3-D Reconstruction of Cells Surrounding a Droplet in Living Tissue