Despite many decades of annual brook trout stocking in one northcentral Pennsylvania watershed, the wild brook trout populations show few genes from hatchery fish, according to researchers who genotyped about 2,000 brook trout in Loyalsock Creek watershed, a 500-square-mile drainage in Lycoming and Sullivan counties celebrated by anglers for its trout fishing.

This finding is important because, according to lead researcher Shannon White, a Penn State doctoral degree student in ecology, a debate continues in many states -- including Pennsylvania -- about the potential effects on wild trout populations, when hatchery-raised brook trout are stocked in streams where wild brook trout are present.

Supplementing wild populations with captive-raised fish increases angling opportunities and has occurred in Pennsylvania for more than a century, White pointed out. But uncertainty remains about the long-term effects of genetic introgression from hatchery-raised fish on wild populations. In particular, she said, introgression between hatchery and wild individuals can cause declines in wild population fitness, resiliency and ability to adapt to changing habitat and climate that could contribute to local population loss.

"This was the first study that we are aware of that looked at genetic introgression on wild brook trout in an actively stocked watershed," White said. "We were somewhat surprised to find more than nine out of 10 fish we evaluated had the wild trout genotype, because similar studies of wild salmon, rainbow trout and other salmonids have shown significant genetic introgression from stocked fish."

Researchers quantified the extent of introgression in wild brook trout -- meaning they possessed genes from stocked, hatchery trout -- at 30 sites in the Loyalsock Creek watershed, and genetic assignment tests were used to determine the origin -- wild versus captive-raised -- for 1,742 wild-caught and 300 hatchery brook trout. To determine if introgression was higher or lower in certain habitats -- possibly indicating that habitat could predict the probability of introgression -- researchers examined the correlation between introgression and 11 environmental variables.

In the end, there was very little statistical evidence to suggest that habitat characteristics affected the probability of introgression in the studied streams, noted Tyler Wagner, adjunct professor of fisheries ecology, whose research group in the College of Agricultural Sciences conducted the research.

"But this result was largely driven by the fact that we had such low rates of introgression to start with," said Wagner, assistant unit leader of the Pennsylvania Cooperative Fish and Wildlife Research Unit at Penn State.

There are good reasons why hatchery-raised, stocked brook trout have mostly not introduced their genes into the wild brook trout gene pool in the Loyalsock Creek watershed, and likely not in most other watersheds across Pennsylvania, White pointed out.

"Why brook trout aren't showing high rates of introgression is still uncertain; however, our guess at this point is that it stems from the high mortality of hatchery-raised fish," she said. "Studies have shown that hatchery raised fish have low fitness and survival and most die within a few months of stocking due to angler harvest, predation or environmental factors. They are stocked in April and May and most of them are gone by July, so few make it to the October-November spawning season."

Another factor limiting genetic introgression, White believes, is that small-stream ecosystems are difficult places for hatchery fish to survive.

"Compared to a larger river or lake, small streams are tough," she said. "It is harder for trout to find food and avoid predators. One thunderstorm can completely change flow patterns. Given that stocked fish are not very good at living in the wild to begin with, when they are put into these really volatile systems there is higher mortality."

The research, recently published in Evolutionary Applications, likely has management implications, White believes. But she stressed that the findings should not be misconstrued as a green light to stock brook trout over wild brook trout populations.

Just the opposite. White urges state agencies and private groups to make stocking decisions on a watershed basis, rather than a stream basis.

"In our research we saw evidence that hatchery trout -- and their genes -- traveled farther than we would have expected, into small tributaries far from stocking points," she said. "That is one thing we found in this study that surprised us -- the large spatial scale at which introgression occurs." 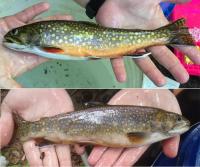 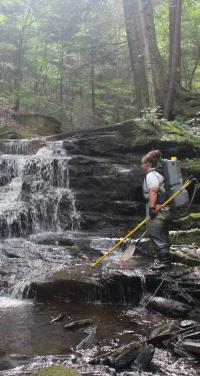