A discovery that links stellar flares with radio-burst signatures will make it easier for astronomers to detect space weather around nearby stars outside the Solar System. Unfortunately, the first weather reports from our nearest neighbour, Proxima Centauri, are not promising for finding life as we know it.

"Astronomers have recently found there are two 'Earth-like' rocky planets around Proxima Centauri, one within the 'habitable zone' where any water could be in liquid form," said Andrew Zic from the University of Sydney.

"But given Proxima Centauri is a cool, small red-dwarf star, it means this habitable zone is very close to the star; much closer in than Mercury is to our Sun," he said.

"What our research shows is that this makes the planets very vulnerable to dangerous ionising radiation that could effectively sterilise the planets."

Led by Mr Zic, astronomers have for the first time shown a definitive link between optical flares and radio bursts on a star that is not the Sun. The finding, published today in The Astrophysical Journal, is an important step to using radio signals from distant stars to effectively produce space weather reports.

"Our own Sun regularly emits hot clouds of ionised particles during what we call 'coronal mass ejections'. But given the Sun is much hotter than Proxima Centauri and other red-dwarf stars, our 'habitable zone' is far from the Sun's surface, meaning the Earth is a relatively long way from these events," Mr Zic said.

"Further, the Earth has a very powerful planetary magnetic field that shields us from these intense blasts of solar plasma."

The study formed part of Mr Zic's doctoral studies at the Sydney Institute for Astronomy under the supervision of Professor Tara Murphy, deputy head of the School of Physics at the University of Sydney. Mr Zic has now taken a joint position at Macquarie University and CSIRO.

He said: "M-dwarf radio bursts might happen for different reasons than on the Sun, where they are usually associated with coronal mass ejections. But it's highly likely that there are similar events associated with the stellar flares and radio bursts we have seen in this study."

"This is probably bad news on the space weather front. It seems likely that the galaxy's most common stars - red dwarfs - won't be great places to find life as we know it," Mr Zic said.

In the past decade, there has been a renaissance in the discovery of planets orbiting stars outside our Solar System. There are now more than 4000 known exoplanets.

The findings strongly suggest planets around these stars are likely to be showered with stellar flares and plasma ejections.

The Proxima Centauri observations were taken with the CSIRO's Australian Square Kilometre Array Pathfinder (ASKAP) telescope in Western Australia, the Zadko Telescope at the University of Western Australia and a suite of other instruments.

University of Western Australia scientist Dr Bruce Gendre, from the ARC Centre of Excellence for Gravitational Wave Discovery (OzGrav), said the research helps understand the dramatic effects of space weather on solar systems beyond our own.

"Understanding space weather is critical for understanding how our own planet biosphere evolved - but also for what the future is," Dr Gendre said.

Professor Murphy said: "This is an exciting result from ASKAP. The incredible data quality allowed us to view the stellar flare from Proxima Centauri over its full evolution in amazing detail.

"Most importantly, we can see polarised light, which is a signature of these events. It's a bit like looking at the star with sunglasses on. Once ASKAP is operating in full survey mode we should be able to observe many more events on nearby stars."

This will give us much greater insights to the space weather around nearby stars.

Other facilities, including NASA's planet-hunting Transiting Exoplanet Survey Satellite and the Zadko Telescope observed simultaneously with ASKAP providing the crucial link between the radio bursts and powerful optical flares observed.

Mr Zic said: "The probability that the observed solar flare and received radio signal from our neighbour were not connected is much less than one chance in 128,000."

The research shows that planets around Proxima Centauri may suffer strong atmospheric erosion, leaving them exposed to very intense X-rays and ultraviolet radiation.

But could there be magnetic fields protecting these planets?

Mr Zic said: "This remains an open question. How many exoplanets have magnetic fields like ours?"

So far there have been no observations of magnetic fields around exoplanets and finding these could prove tricky. Mr Zic said one potential way to identify distant magnetic fields would be to look for aurorae, like those around Earth and also witnessed on Jupiter.

"But even if there were magnetic fields, given the stellar proximity of habitable zone planets around M-dwarf stars, this might not be enough to protect them," Mr Zic said.

ABOUT THE SYDNEY INSTITUTE FOR ASTRONOMY

The Sydney Institute for Astronomy (SIFA) is a national and international leader in Astronomy and Astrophysics. The University of Sydney is ranked 2nd in Australia and 39th in the world for Space Science by the US News higher education ranking.

SIFA scientists conduct research in many frontline areas including exoplanets, asteroseismology, stellar and plasma astrophysics, black-hole binaries, supernovae, transient sources, the interstellar medium, and the Galactic Centre. It carries out detailed studies of the Local Group of galaxies, including the Milky Way, Andromeda and the Magellanic Clouds. At greater distances, its scientists study active galaxies and quasars, clusters of galaxies, gravitational lensing and cosmology.

SIFA has leadership or key involvement in several major surveys including the Kepler K2GAP survey, the Galactic Archaeology (GALAH) survey of a million stars, the Southern Stellar Stream Spectroscopic Survey (S5), the SAMI Galaxy Survey, the OzDES galaxy survey, the FLASH survey of radio galaxies, the MAGPI survey of galaxies in the cosmic "middle-ages" and the VAST survey for radio transients on the Australian SKA Pathfinder (ASKAP) telescope.

We acknowledge the Wajarri Yamatji as the traditional owners of the Murchison Radio Astronomy Observatory site. 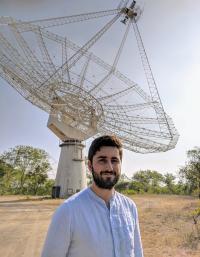