Astronomers have discovered that our nearest big neighbour, the Andromeda galaxy, is roughly the same size as the Milky Way.

It had been thought that Andromeda was two to three times the size of the Milky Way, and that our own galaxy would ultimately be engulfed by our bigger neighbour.

But the latest research, published today, evens the score between the two galaxies.

It found the weight of the Andromeda is 800 billion times heavier than the Sun, on par with the Milky Way.

Astrophysicist Dr Prajwal Kafle, from The University of Western Australia node of the International Centre for Radio Astronomy Research, said the study used a new technique to measure the speed required to escape a galaxy.

"When a rocket is launched into space, it is thrown out with a speed of 11km/s to overcome the Earth's gravitational pull," he said.

"Our home galaxy, the Milky Way, is over a trillion times heavier than our tiny planet Earth so to escape its gravitational pull we have to launch with a speed of 550km/s.

"We used this technique to tie down the mass of Andromeda."

"By examining the orbits of high speed stars, we discovered that this galaxy has far less dark matter than previously thought, and only a third of that uncovered in previous observations," he said.

The Milky Way and Andromeda are two giant spiral galaxies in our local Universe, and light takes a cosmologically tiny two million years to get between them.

With Andromeda no longer considered the Milky Way's big brother, new simulations are needed to find out what will happen when the two galaxies eventually collide.

Dr Kafle used a similar technique to revise down the weight of the Milky Way in 2014, and said the latest finding had big implications for our understanding of our nearest galactic neighbours.

"It completely transforms our understanding of the local group," he said.

"We had thought there was one biggest galaxy and our own Milky Way was slightly smaller but that scenario has now completely changed.

"It's really exciting that we've been able to come up with a new method and suddenly 50 years of collective understanding of the local group has been turned on its head."

University of Sydney astrophysicist Professor Geraint Lewis said it was exciting to be at a time when the data was getting so good.

"We can put this gravitational arms race to rest," he said.

Original Publication: 'The Need for Speed: Escape velocity and dynamical mass measurements of the Andromeda galaxy', published in the Monthly Notices of the Royal Astronomical Society on February 15th, 2018.

Multimedia: Images and a computer-generated animation are available from http://www.icrar.org/cosmic-collision 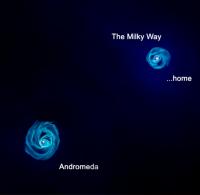 The Milky Way and Andromeda Prior to the Merger 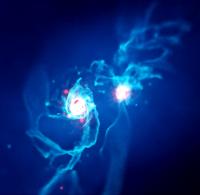 The Milky Way and Andromeda During the Merger