Professor Uichin Lee of the Department of Industrial and Systems Engineering and the Graduate School of Knowledge Service Engineering at KAIST and his research team designed and evaluated Mobile Roadwatch, a mobile app that helps citizen record traffic violation with their smartphones and report the recorded videos to the police.

This app supports continuous video recording just like onboard vehicle dashboard cameras. Mobile Roadwatch allows drivers to safely capture traffic violations by simply touching a smartphone screen while driving. The captured videos are automatically tagged with contextual information such as location and time. This information will be used as important evidence for the police to ticket the violators. All of the captured videos can be conveniently reviewed, allowing users to decide which events to report to the police.

The team conducted a two-week field study to understand how drivers use Mobile Roadwatch. They found that the drivers tended to capture all traffic risks regardless of the level of their involvement and the seriousness of the traffic risks. However, when it came to actual reporting, they tended to report only serious traffic violations, which could have led to car accidents, such as traffic signal violations and illegal U-turns. After receiving feedback about their reports from the police, drivers typically felt very good about their contributions to traffic safety.

At the same time, some drivers felt pleased to know that the offenders received tickets since they thought these offenders deserved to be ticketed. While participating in the Mobile Roadwatch campaign, drivers reported that they tried to drive as safely as possible and abide by traffic laws. This was because they wanted to be as fair as possible so that they could capture others' violations without feeling guilty. They were also afraid that other drivers might capture their violations.

Professor Lee said, "Our study participants answered that Mobile Roadwatch served as a very useful tool for reporting traffic violations, and they were highly satisfied with its features. Beyond simple reporting, our tool can be extended to support online communities, which help people actively discuss various local safety issues and work with the police and local authorities to solve these safety issues."

Korea and India were the early adaptors supporting video-based reporting of traffic violations to the police. In recent years, the number of reports has dramatically increased. For example, Korea's 'Looking for a Witness' (released in April 2015) received more than half million reported violations as of November 2016. In the US, authorities started tapping into smartphone recordings by releasing video-based reporting apps such as ICE Blackbox and Mobile Justice. Professor Lee said that the existing services cannot be used while driving, because none of the existing services support continuous video recording and safe event capturing behind the wheel.

Professor Lee's team has been incorporating advanced computer vision techniques into Mobile Roadwatch for automatically capturing traffic violations and safety risks, including potholes and obstacles. The researchers will present their results in May at the ACM CHI Conference on Human Factors in Computing Systems (CHI 2017) in Denver, CO, USA. Their research was supported by the KAIST-KUSTAR fund. 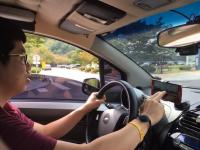