Cell membranes contain ion channels that regulate the permeation of various ions between the inside and outside of the cell. Ion channels are proteins, and in response to diverse stimuli, they allow specific ions to permeate. In this way the cell regulates the electric signals that form the basis of the function of muscles and the nervous system. Since a malfunction of ion channels causes a number of disorders such as myocardial infarction and epilepsy, it is important to understand the mechanism of action of molecules that hamper ion channel functions.

Scorpion venom has been found to contain more than 200 compounds that bind to K+ channels*1. Among them, AgTx2 is a peptide*2 consisting of 38 amino acid residues. Previous studies showed that by binding to the K+ channel from outside the cell membrane, AgTx2 blocks the K+ channel pore and inhibits K+ permeation. However, the detailed molecular mechanism remained unknown, e.g. whether the binding dynamics could be explained by a two-state model of association and dissociation.

The present research team, including scientists from Kanazawa University, visualized the association and dissociation of AgTx2 with the K+ channel KcsA*3 using high-speed atomic force microscopy (HS-AFM)*4 and performed a detailed analysis of the dynamics (Figure 1). KcsA is a tetramer, its subunits forming a ring-like structure. Upon AgTx2 binding to the tetramer surface, the central part of the channel, i.e. the passage for K+, appeared swollen due to AgTx2 binding. The binding and dissociation of AgTx2 to the K+ channel could take place repeatedly and the height around the channel center changed accordingly (Figure 2). When the AgTx2 concentration in the solution was high, the binding probability was also high. Time courses of the binding and dissociation revealed that upon binding of AgTx2 to KcsA, the conformation of KcsA changed, which allowed AgTx2 binding more easily, and that even upon dissociation of AgTx2, another AgTx2 molecule could bind to KcsA very quickly; this is referred to as an induced-fit*5 mechanism. On the other hand, it was observed that, when sufficient time elapsed after AgTx2 dissociation, the conformation of KcsA changed back to the original, to which AgTx2 bound less readily. These results indicate that the binding dynamics cannot be explained with a simple two state model, i.e. binding and dissociation. It seemed that both the association and dissociation states of KcsA could be distinguished as at least two sub-states; a four state association model was therefore considered (Figure 3). When the reaction rates were calculated for a four-state model the rates obtained reflected those obtained experimentally. A simulation of the binding dynamics with this four-state model and the associated reaction rates, showed AgTx2 binding to be primarily via the induced-fit pathway. Further, it was found that the induced-fit accelerated AgTx2 binding by 400-fold. Thus, the mechanism of AgTx2 to efficiently inhibit the function of KcsA has been elucidated (Figure 3).

The HS-AFM observation technique and method used for the analysis of binding of the K+ channel and the peptide inhibitor can be applied to a wide variety of biological molecules. They can be applied to analyses of a ligand binding to its receptor as well as association of DNA and a DNA-binding protein. This study is expected to accelerate the elucidation of binding dynamics of various biological molecules.

Potassium channel is an ion channel that allows selective permeation of K+.

Peptides are compounds consisting of 2 to about 50 amino acids connected in a linear manner by peptide bonds.

One of the smallest K+ channels in terms of molecular weight. It forms a tetramer to function as a K+ channel. Upon the intracellular pH becoming lower than normal, the gate of the KcsA channel opens and allows highly selective permeation of K+. Since its crystal structure is known and its stability is high, it is widely used as a model for K+ channels in research.

Upon binding of a molecule to its receptor, the conformation of the receptor changes to induce tighter binding. 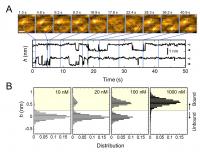 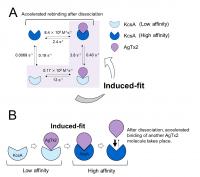