For more than 3000 years, hundreds of millions of people have died or been left permanently scarred or blind by the relentless, incurable disease called smallpox. In 1967, Dr. D.A. Henderson became director of a worldwide campaign to eliminate this disease from the face of the Earth. SMALLPOX—THE DEATH OF A DISEASE: THE INSIDE STORY OF ERADICATING A WORLDWIDE KILLER (Prometheus Books, $27.98) is Dr. Henderson's personal story of how he led the World Health Organization's campaign to eradicate smallpox—the only disease in history to have been deliberately eliminated. Some have called this feat "the greatest scientific and humanitarian achievement of the past century."

In a lively, engrossing narrative—one that reaches audiences just as the World Health Organization has declared the Swine Flu a worldwide pandemic—Dr. Henderson explains that the massive international effort involved more than straightforward mass vaccination. He and his staff had to cope with civil wars, floods, impassable roads, and refugees as well as formidable bureaucratic and cultural obstacles, shortages of local health personnel and meager budgets. Countries across the world joined in the effort; the United States and the Soviet Union worked together through the darkest cold war days; and professionals from more than 70 nations served as WHO field staff. On October 26, 1976, the last case of smallpox occurred. The disease that annually had killed two million people or more had been vanquished–and in just over ten years.

"The eradication of smallpox was the greatest public health accomplishment of the twentieth century. But the lessons of the story—bureaucracies circumvented, Cold War rivalries overcome, local citizens mobilized—extend far beyond global health. D.A. Henderson's Smallpox—The Death of a Disease makes me optimistic about our future," said Elizabeth Fenn, author of Pox Americana: The Great Smallpox Epidemic of 1775-82, and Associate Professor of History, Duke University,

Dr. Henderson also recounts in vivid detail the continuing struggle over whether to destroy the remaining virus in the two laboratories still that held it. Then came the startling discovery that the Soviet Union had been experimenting with smallpox virus as a biological weapon and producing it in large quantities. The threat of its possible use by a rogue nation or a terrorist has had to be taken seriously and Dr. Henderson has been a central figure in plans for coping with it. New methods for mass smallpox vaccination were so successful that he sought to expand the program of smallpox immunization to include polio, measles, whooping cough, diphtheria, and tetanus vaccines. That program now reaches more than four out of five children in the world and is eradicating poliomyelitis. This unique book is to be treasured—a personal and true story that proves that through cooperation and perseverance the most daunting of obstacles can be overcome.

"Thorough, balanced and well-crafted, [this] is the story of one of mankind's greatest achievements," said Tommy G. Thompson, Secretary of Health and Human Services (2001-2005) and Governor of Wisconsin (1987-2001). "The success of the eradication campaign is a testament to the difference the global public health community can make when it truly comes together for a common purpose. Whether one speaks of HIV/AIDS or Neglected Tropical Diseases, the solution lies in allies and adversaries working as one to alleviate suffering and save lives. This is the lesson to be drawn from Dr. Henderson's excellent book."

About the Author: D.A. Henderson, MD is currently professor of medicine and public health at the University of Pittsburgh and a distinguished scholar at the Center for Biosecurity in Baltimore. He is a professor and former dean of the Johns Hopkins School of Public Health. He served as Life Sciences Adviser to President G. H. W. Bush and was the first director of the newly created Office of Public Health Emergency Preparedness in the Department of Health and Human Services. The recipient of the Presidential Medal of Freedom and the National Medal of Science plus many other awards, he has received the Japan Prize and has been knighted by the King of Thailand.

MEDIA NOTE: D.A. Henderson, MD, is available to discuss the history and eradication of smallpox as well as comment on Swine Flu and the related bioterrorism concerns of this pandemic. His infectious disease expertise has been in smallpox, polio, influenza, and anthrax. More generally, Henderson's time has been spent on surveillance, public health education, and international public health policies and development. Contact Prometheus Books at publicity@prometheusbooks.com or 1-800-853-7545 for author contact information or to request press materials or a review copy of SMALLPOX—THE DEATH OF A DISEASE: THE INSIDE STORY OF ERADICATING A WORLDWIDE KILLER (ISBN 978-1-59102-722-5)

'Smallpox -- The Death of a Disease' 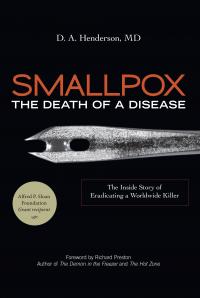 'Smallpox -- The Death of a Disease: The Inside Story of Eradicating a Worldwide Killer'