UNIVERSITY PARK, Pa. -- The Maya are famous for their complex, intertwined calendric systems, and now one calendar, the Maya Long Count, is empirically calibrated to the modern European calendar, according to an international team of researchers.

"Methods of tying the Long Count to the modern European calendar used known historical and astronomical events, but when looking at how climate affects the rise and fall of the Maya, I began to question how accurately the two calendars correlated using those methods."

The researchers found that the new measurements mirrored the most popular method in use, the Goodman-Martinez-Thompson (GMT) correlation, initially put forth by Joseph Goodman in 1905 and subsequently modified by others. In the 1950s scientists tested this correlation using early radiocarbon dating, but the large error range left open the validity of GMT.

"With only a few dissenting voices, the GMT correlation is widely accepted and used, but it must remain provisional without some form of independent corroboration," the researchers report in today's (April 11) issue of Scientific Reports.

Archaeologists want to place the Long Count dates into the European calendar so there is an understanding of when things happened in the Maya world relative to historic events elsewhere. Correlation also allows the rich historical record of the Maya to be compared with other sources of environmental, climate and archaeological data calibrated using the European calendar.

The samples came from an elaborately carved wooden lintel or ceiling from a temple in the ancient Maya city of Tikal, Guatemala, that carries a carving and dedication date in the Maya calendar. This same lintel was one of three analyzed in the previous carbon-14 study.

Researchers measured tree growth by tracking annual changes in calcium uptake by the trees, which is greater during the rainy season.

The amount of carbon-14 in the atmosphere is incorporated into a tree's incremental growth. Atmospheric carbon-14 changes through time, and during the Classic Maya period oscillated up and down.

The researchers took four samples from the lintel and used annually fluctuating calcium concentrations evident in the incremental growth of the tree to determine the true time distance between each by counting the number of elapsed rainy seasons. The researchers used this information to fit the four radiocarbon dates to the wiggles in the calibration curve. Wiggle-matching the carbon-14 dates provided a more accurate age for linking the Maya and Long Count dates to the European calendars.

These calculations were further complicated by known differences in the atmospheric radiocarbon content between northern and southern hemisphere.

The researchers results mirror the GMT European date correlations indicating that the GMT was on the right track for linking the Long Count and European calendars.

Events recorded in various Maya locations "can now be harmonized with greater assurance to other environmental, climatic and archaeological datasets from this and adjacent regions and suggest that climate change played an important role in the development and demise of this complex civilization," the researchers wrote. 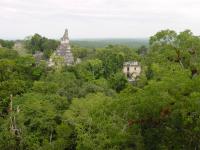 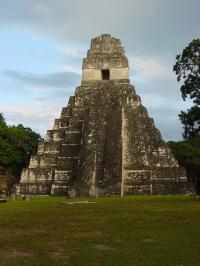