CHESTNUT HILL, MA (January 12, 2009) – German scientist Otto H. Warburg's theory on the origin of cancer earned him the Nobel Prize in 1931, but the biochemical basis for his theory remained elusive.

His theory that cancer starts from irreversible injury to cellular respiration eventually fell out of favor amid research pointing to genomic mutations as the cause of uncontrolled cell growth.

A descendant of German aristocrats, World War I cavalry officer and pioneering biochemist, Warburg first proposed in 1924 that the prime cause of cancer was injury to a cell caused by impairment to a cell's power plant – or energy metabolism – found in its mitochondria.

In contrast to healthy cells, which generate energy by the oxidative breakdown of a simple acid within the mitochondria, tumors and cancer cells generate energy through the non-oxidative breakdown of glucose, a process called glycolysis. Indeed, glycolysis is the biochemical hallmark of most, if not all, types of cancers. Because of this difference between healthy cells and cancer cells, Warburg argued, cancer should be interpreted as a type of mitochondrial disease.

In the years that followed, Warburg's theory inspired controversy and debate as researchers instead found that genetic mutations within cells caused malignant transformation and uncontrolled cell growth. Many researchers argued Warburg's findings really identified the effects, and not the causes, of cancer since no mitochondrial defects could be found that were consistently associated with malignant transformation in cancers.

Boston College biologists and colleagues at Washington University School of Medicine found new evidence to support Warburg's theory by examining mitochondrial lipids in a diverse group of mouse brain tumors, specifically a complex lipid known as cardiolipin (CL). They reported their findings in the December edition of the Journal of Lipid Research.

Abnormalities in cardiolipin can impair mitochondrial function and energy production. Boston College doctoral student Michael Kiebish and Professors Thomas N. Seyfried and Jeffrey Chuang compared the cardiolipin content in normal mouse brain mitochondria with CL content in several types of brain tumors taken from mice. Bioinformatic models were used to compare the lipid characteristics of the normal and the tumor mitochondria samples. Major abnormalities in cardiolipin content or composition were present in all types of tumors and closely associated with significant reductions in energy-generating activities.

The findings were consistent with the pivotal role of cardiolipin in maintaining the structural integrity of a cell's inner mitochondrial membrane, responsible for energy production. The results suggest that cardiolipin abnormalities "can underlie the irreversible respiratory injury in tumors and link mitochondrial lipid defects to the Warburg theory of cancer," according to the co-authors.

These findings can provide insight into new cancer therapies that could exploit the bioenergetic defects of tumor cells without harming normal body cells.

Seyfried, Chuang and Kiebish were joined by co-authors Xianlin Han and Hua Cheng from the Washington University School of Medicine, Department of Internal Medicine, in St. Louis.

The paper, "Cardiolipin and Electron Transport Chain Abnormalities in Mouse Brain Tumor Mitochondria: Lipidomic Evidence Supporting the Warburg Theory of Cancer," can be viewed at: http://www.jlr.org/cgi/content/full/49/12/2545 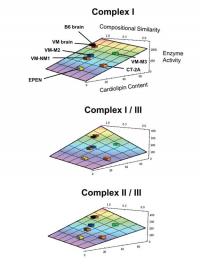