How different are men and women's brains?

The latest evidence to address this controversy comes from a study at Rosalind Franklin University of Medicine and Science, where a meta-analysis of human amygdala volumes found no significant difference between the sexes. Meta-analysis is a statistical approach for combining the results of multiple studies, in this case dozens of brain MRI studies.

"Despite the common impression that men and women are profoundly different, large analyses of brain measures are finding far more similarity than difference," said Lise Eliot, PhD, principal investigator and associate professor of neuroscience at RFU's Chicago Medical School. "There is no categorically 'male brain' or 'female brain,' and much more overlap than difference between genders for nearly all brain measures."

The olive-sized amygdala is a key brain structure involved in all types of emotion and in social behaviors such as aggression and sexual arousal. Animal studies and early MRI reports indicated that the amygdala is disproportionately larger in males' brains. Such a size difference has been suggested to contribute to sex differences in emotionality and in the prevalence of disorders such as anxiety and depression.

Biologists use the term "sexually dimorphic" (literally, "two different forms") to describe male-female differences. This new study shows that the term does not apply to human amygdala volume. It joins other recent research that challenges the concept of binary "male" and "female" human brains, and may have relevance to understanding disorders including depression, substance abuse, and gender dysphoria.

The report is co-authored by RFU medical students Dhruv Marwha and Meha Halari, who worked with Eliot to systematically identify all MRI studies of the human amygdala over the past 30 years. They found 58 published comparisons of amygdala volume in matched groups of healthy men and women (or boys and girls) that included 6,726 total participants. Studies reporting raw amygdala volume show that the structure is indeed about 10 percent larger in male brains. However, this difference is comparable to males' larger body size, including the 11-12 percent larger volume of males' brains overall. Among studies that reported amygdala volumes corrected for overall brain size, the volume difference was negligible (<0.1 percent in the right amygdala, 2.5 percent in the left amygdala) and not statistically significant.

The paper appears in the journal NeuroImage.

In a similar 2015 meta-analysis, Dr. Eliot headed a Chicago Medical School team that debunked the widely-held belief that the brain's hippocampus, which consolidates new memories, is larger in women than men.

"There are behavioral reasons to suspect a sex difference in the amygdala," Dr. Eliot said. "Emotion, empathy, aggression, and sexual arousal all depend on it. Also, the evidence from animal studies suggesting a sex difference in amygdala volume is stronger than it is for the hippocampus. So this finding is more surprising than our hippocampal result and suggests that human brains are not as sexually dimorphic as rats."

This study strengthens the case for gender similarity in the human brain and psychological abilities and has implications for efforts to understand the transgender brain. 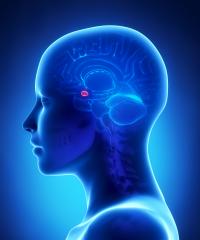