Scientists and educators alike have long known that cramming is not an effective way to remember things. With their latest findings, researchers at the RIKEN Brain Science Institute in Japan, studying eye movement response in trained mice, have elucidated the neurological mechanism explaining why this is so. Published in the Journal of Neuroscience, their results suggest that protein synthesis in the cerebellum plays a key role in memory consolidation, shedding light on the fundamental neurological processes governing how we remember.

The "spacing effect", first discovered over a century ago, describes the observation that humans and animals are able to remember things more effectively if learning is distributed over a long period of time rather than performed all at once. The effect is believed to be closely connected to the process of memory consolidation, whereby short-term memories are stabilized into long-term ones, yet the underlying neural mechanism involved has long remained unclear.

To clarify this mechanism, the researchers developed a technique based around the phenomenon of horizontal optokinetic response (HOKR), a compensatory eye movement which can be used to quantify the effects of motor learning. Studying HOKR in mice, they found that the long-term effects of learning are strongly dependent on whether training is performed all at once ("massed training"), or in spaced intervals ("spaced training"): whereas gains incurred in massed training disappeared within 24 hours, those gained in spaced training were sustained longer (Fig. 1+2).

Earlier research suggested that this spacing effect is the product of the transfer of the memory trace from the flocculus, a cerebellar cortex region which connects to motor nuclei involved in eye movement, to another brain region known as the vestibular nuclei (Fig. 3). To verify this idea, the team administered local anesthetic to the flocculus and studied its effect on learning. While learning gains in mice that had undergone one hour of massed training were eliminated, those in mice that had undergone the same amount of training spaced out over a four hour period were unaffected.

Explaining this observation, the researchers found that the spacing effect was impaired when mice were infused with anisomycin and actinomycin D, antibiotics which inhibit protein synthesis. This final discovery suggests that proteins produced during training play a key role in the formation of long-term memories, providing for the first time a neurological explanation for the well-known benefits of spaced learning - as well as a great excuse to take more breaks.

A better way to remember 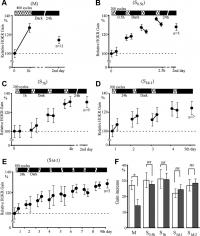 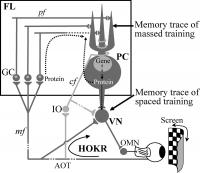