As Tropical Storm Kirk came back to life, the Global Precipitation Measurement mission or GPM core satellite analyzed its rainfall. Kirk is headed toward the Lesser Antilles and Warnings are in effect.

On Sept. 27, the National Hurricane Center or NHC posted a Tropical Storm Warning for Barbados, St. Lucia, Dominica, Martinique, and Guadeloupe. A Tropical Storm Watch is in effect for St. Vincent and the Grenadines.

The GPM core observatory satellite scanned reviving tropical storm Kirk on September 25, 2018 at 7:35 p.m. (2335 UTC). Data collected by the satellite's Microwave Imager (GMI) instrument showed that intense convective precipitation was taking place near the center of the reviving tropical storm. GMI's scans indicated that rain was falling at over 71 mm (2.8 inches) in some of these storms. GPM's Dual-Frequency Precipitation Radar (DPR) probed storms that were located to the east and northeast of the center of the regenerating tropical storm. DPR found rain there falling at a rate of over 69 mm (2.7 inches) per hour.

The term dBz is basically a measure of the strength of the reflected energy. The higher the dBz value, the stronger the intensity of the precipitation detected by the radar.

GPM also found that precipitation was reaching heights above 11.2 km (6.9 miles) in a few powerful storms. GPM is a joint mission between NASA and the Japan Aerospace Exploration Agency, JAXA.

At 11 a.m. EDT (1500 UTC) on Sept. 27 the center of Tropical Storm Kirk was located near latitude 13.8 degrees north and longitude 59.3 degrees west. That's about 45 miles (70 km) north-northeast of Barbados. Kirk was moving toward the west-northwest near 15 mph (24 kph) and this general motion with a slight decrease in forward speed is expected over the next few days. On the forecast track, the center of Kirk will move across the Lesser Antilles within the Tropical Storm Warning area by this evening.

Maximum sustained winds are near 50 mph (85 kph) with higher gusts. Gradual weakening is anticipated during the next couple of days, but Kirk is forecast to move across the Lesser Antilles and into the eastern Caribbean Sea as a tropical storm.

The National Hurricane Center (NHC) noted that the heavy rainfall detected by GPM will be affecting the warning area. NHC said "Kirk is expected to produce total rainfall of 4 to 6 inches across the northern Windward and southern Leeward Islands with isolated maximum totals up to 10 inches across Martinique and Dominica. These rains may produce life-threatening flash floods and mudslides. Across eastern Puerto Rico, Kirk is expected to bring 2 to 4 inches with isolated maximum totals of 6 inches by Friday and Saturday, Sept. 29."

Interests elsewhere in the central and northern Lesser Antilles should monitor the progress of Kirk. 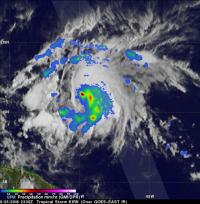