While tracing the movement of Escherichia coli, a team of French researchers noticed that near solid surfaces, the bacteria run in circles. Loop after loop, the tracing almost looks like an Olympic figure skating rink before the Zamboni irons the sheet of ice smooth. Breaking down E. coli's routine step by step, the scientists identified a signature move--surface tumbling. The work appears May 5 in the Biophysical Journal.

Bacteria can live as individuals, swimming freely around the environment, but eventually, they settle down on surfaces to form colonies and biofilms. To do so, bacteria randomly tumble to slow down and re-orientate themselves three-dimensionally, to explore and find the ideal environment.

"Tumbles are very interesting. The bacteria itself does not know where the environment is preferential for them," says first author Laurence Lemelle, a biophysicist at École Normale Supérieure de Lyon (Normal School of Lyon). "It doesn't know where to go, how to feel things. But it knows if the past environment was better or worse than the present." Bacteria use the gathered information to stop tumbling or lower the frequency of tumbling. "This means you swim more towards a direction. At the end, the population statistically swims towards the preferential conditions," she says.

Some studies claim that bacteria don't tumble and only swim when they're near a surface. But Lemelle and her colleagues say that claim sounds unlikely. Physics predicts that bacteria would get trapped, running in infinite circles on the surface if they only swam.

However, it's not easy to track these tiny creatures. Propelling forward with their several tails known as flagella, bacteria swim 20 times the length of their body in one second, and tumble happens even quicker, at one-tenth of a second. In fact, you're likely to miss the tumble even if your camera is high-res enough to film bacteria. To take a close look at how bacteria escaped from the surface, the team built a high-magnification, high-sensitivity, high-speed camera equipped with night vision.

"We now know that bacteria can tumble on surfaces, and these tumbles are very specific," said Lemelle. "Elucidating the strategy of surface exploration that is underlined by these tumbles is an important future step."

To the bacteria, tumbling allows them to escape from the surface, enabling them to colonize other places and optimize the exploration of the surface itself. Bacteria can swim on cell surfaces until they get in contact with a specific receptor to optimize infections. They can also swim to settle down on surfaces that are difficult to clean to form bacterial biofilms, which can be antibiotic-resistant.

"Before the pandemia, the COVID pandemic, it was difficult to convince people that we need to anticipate and develop alternative approaches to reduce the surface biocontamination," said Lemelle. "People were like, 'We have plenty of antibiotics. There's resistance, but we have time.' From a medical standpoint, understanding the near-surface tumbling events of bacteria can help limit the biocontamination of surfaces and develop antibacterial methods."

This work was supported by the Agence Nationale de la Recherche.

The Biophysical Journal (@BiophysJ), published by Cell Press for the Biophysical Society, is a bimonthly journal that publishes original research and reviews on the most important developments in modern biophysics-a broad and rapidly advancing field encompassing the study of biological structures and focusing on mechanisms at the molecular, cellular, and systems levels through the concepts and methods of physics, chemistry, mathematics, engineering, and computational science. Visit: http://www.cell.com/biophysj/home. To receive Cell Press media alerts, contact press@cell.com.

Scientists observe bacteria tumble their way out of surface traps 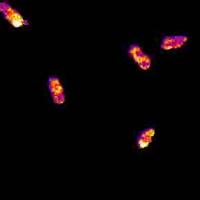