A mathematically driven evolutionary snapshot of woody plants in four similar climates around the world has given scientists a fresh perspective on genetic diversity and threats posed by both extinctions and loss of habitat.

The message from the study, appearing online ahead of publication in Ecology Letters, says lead author Hélène Morlon, is that evolutionary diversity -- the millions of years of evolutionary innovations contained in present-day species -- is more sensitive to extinctions or loss of habitat than long thought. And that, she adds, means conservation efforts really need to take into consideration how species are evolutionarily related.

"We are all interested in preserving biodiversity," said Morlon, a French scientist formerly with the University of Oregon's Center for Ecology and Evolutionary Biology as a postdoctoral researcher and now at the University of California, Berkeley. "This means trying to preserve the most species we can, but remembering that all species are not equal. None of us want to make choices on which species to preserve, but if we have to, we might be interested in preserving the species that are the most unique in evolutionary history. There are also other characteristics of species to consider, of course. Biodiversity is simply too complex to be summarized by a single number -- be it species richness or phylogenetic diversity."

Since conservation efforts take place within specific geographical or geopolitical areas, Morlon said: "It is important to understand how biodiversity is distributed spatially." To consider that, the researchers focused on plant species living within defined areas in Mediterranean-type regions around the world -- Australia, California, Chile and South Africa.

For 538 plant species, which covered 254 genera and 71 families, researchers built an evolutionary tree tracing them back to their common ancestor. They then applied mathematical approaches that considered the increase of evolutionary diversity with the size of geographic areas, as well as the decay of evolutionary similarity with the geographic separation between various communities.

"When you think about species, you usually think of, say, those in the Northwest, and they are not present in South Africa," she said. "When people have thought about preserving the tree of life, not preserving only species but also all this evolutionary history, they have tended to think at a global scale. If you consider a branch of the tree of life that is present in the Northwest and also in South- Africa, you can lose one while the other remains to preserve diversity on the planet. These connections are important to make, but it is important to preserve phylogenetic diversity at regional scales, not only the global scale."

"The tools that conservationists use to preserve species at regional scales are not well adapted for preserving phylogenetic diversity," said Morlon, who is also on the faculty of Ecole Polytechnique in France. "This paper gives some clues on how to preserve that diversity."

"The beauty of Helene's work is that she has truly brought together ideas from ecology and evolution," said co-author Jessica Green, a UO biologist in the Center for Ecology and Evolutionary Biology (CEEB) and the Santa Fe Institute. "If you open any ecology textbook a central theme is island biogeography, which was developed by Robert MacArthur and E. O. Wilson to explain why larger islands have more species on them than smaller islands. Helene has brought evolution front and center to this classic field of study. I anticipate that her ideas about how evolutionary history increases with increasing habitat area will land in the next generation of science textbooks."

Study co-authors with Morlon and Green, who was named Dec. 15 as a 2011 TED Senior Fellow, were: Dylan W. Schwilk of Texas Tech University; Jessica A. Bryant of the UO CEEB and the Massachusetts Institute of Technology; Pablo A. Marquet of Pontifical Catholic University of Chile, the Institute of Ecology and Biodiversity in Santiago, Chile, and the Santa Fe Institute in New Mexico; Anthony G. Rebelo of the South African National Biodiversity Institute in Kirstenbosch, South Africa; Catherine Tauss of University of Western Australia in Perth; and Brendan Bohannan of the UO CEEB.

The National Science Foundation supported the research through grants to UO professors Green and Bohannan. Additional funding was provided through FONDAP grants to Marquet from Chile's National Commission for Science and Technology.

The University of Oregon is a world-class teaching and research institution and Oregon's flagship public university. The UO is a member of the Association of American Universities (AAU), an organization made up of the 63 leading public and private research institutions in the United States and Canada. The UO is one of only two AAU members in the Pacific Northwest. 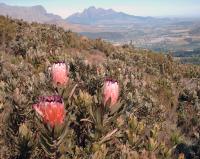