Could long-distance interactions between individual molecules forge a new way to compute?

Interactions between individual molecules on a metal surface extend for surprisingly large distances - up to several nanometers.

A new study, just published, of the changing shape of electronic states induced by these interactions, has potential future application in the use of molecules as individually addressable units.

For example, in a future computer based on this technology, the state of each individual molecule could be controlled, mirroring binary operation of transistors in current computing.

The Monash-University of Melbourne collaboration studied the electronic properties of magnesium phthalocyanine (MgPc) sprinkled on a metal surface.

MgPc is similar to the chlorophyll responsible for photosynthesis.

By careful, atomically-precise scanning probe microscopy measurements, the investigators demonstrated that the quantum mechanical properties of electrons within the molecules - namely their energy and spatial distribution - are significantly affected by the presence of neighbouring molecules.

This effect - in which the underlying metal surface plays a key role - is observed for intermolecular separation distances of several nanometres, significantly larger than expected for this kind of intermolecular interaction.

These insights are expected to inform and drive progress in the development of electronic and optoelectronic solid-state technologies built from molecules, 2D materials and hybrid interfaces.

The phthalocyanine (Pc) 'four leaf clover' ligand, when decorated with a magnesium (Mg) atom at its centre, is part of the chlorophyll pigment responsible for photosynthesis in bio organisms.

Metal-phthalocyanines are exemplary for the tunability of their electronic properties by swapping the central metal atom and peripheral functional groups, and their ability to self-assemble in highly ordered single layers and nanostructures.

Quantitative analysis of the experimental results and theoretical modelling showed that this interaction was due to mixing between the quantum mechanical orbitals - which determine the spatial distribution of electrons within the molecule - of neighbouring molecules. This molecular orbital mixing leads to significant changes in electron energies and electron distribution symmetries.

"We had to push our scanning probe microscope to new limits in terms of spatial resolution and complexity of data acquisition and analysis", says lead author and FLEET member Dr Marina Castelli.

"It was a big shift in thinking to quantify the intermolecular interaction from the point of view of symmetries of spatial distribution of electrons, instead of typical spectroscopic shifts in energy, which can be more subtle and misleading. This was the key insight that got us to the finish line, and also why we think that this effect was not observed previously."

"Importantly, the excellent quantitative agreement between experiment and atomistic DFT theory confirmed the presence of long-range interactions, giving us great confidence in our conclusions", says collaborator Dr Muhammad Usman from the University of Melbourne.

The outcomes of this study can have great implications in the development of future solid-state electronic and optoelectronic technologies based on organic molecules, 2D materials and hybrid interfaces.

All experiments were performed at Monash University, supported through the Australian Research Council, FLEET Centre of Excellence (CE170100039), and Monash Centre of Atomically Thin Materials (MCATM). Additional support was provided by Dr Schiffrin's ARC Future Fellowship (FT150100426). Numerical simulations were performed at the University of Melbourne, supported by resources provided by the National Computing Infrastructure (NCI) and Pawsey Supercomputing Centre through NCMAS.

Dr Schiffrin's group at FLEET uses SPM to investigate the atomic-scale properties - structural and electronic - of new nanomaterials with potential use in future low-energy electronic technologies.

FLEET is an Australian Research Council-funded research centre bringing together over a hundred Australian and international experts to develop a new generation of ultra-low energy electronics. 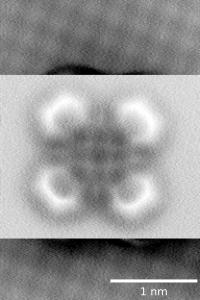