(Millbrook, NY) Ecologists have long known that agricultural and sewage pollution can cause low oxygen conditions and fish kills in rivers. A study published today in Nature Communications reports that hippo waste can have a similar effect in Africa's Mara River, which passes through the world renowned Maasai Mara National Reserve of Kenya, home to more than 4,000 hippos.

Co-author Emma Rosi, a Freshwater Ecologist at the Cary Institute of Ecosystem Studies, explains, "Together, the Mara's resident hippos add about 8,500 kg - or 9.3 tons - of partially digested plant material into the river each day. We were interested in how this massive influx of organic matter and nutrients influenced aquatic life."

Hippos spend their nights grazing in the savanna and their days wallowing in shallow pools to keep cool and escape the sun. As they wallow, they excrete waste, which depletes oxygen from the water as it decomposes. Microbial activity also produces chemicals like ammonium and sulfide, known to be toxic to fish.

Over three years, the team monitored water chemistry and flow downstream from 171 hippo pools. Of the documented 55 flushing flows - defined as when rain events increased river flow to twice its normal rate - dissolved oxygen concentrations declined during 49 of the events, falling low enough to cause fish kills 13 times.

To understand the mechanisms driving dissolved oxygen crashes, the team undertook multiple experimental approaches. Because hippos are too dangerous to approach, sensors attached to a remote-controlled boat were used to measure water chemistry in hippo pools. To simulate stream flow and understand the effects of oxygen consumption by added hippo waste, experiments were conducted in bathtub-sized artificial streams. The team also manipulated a pool in the Mara to produce an experimental flushing flow.

Two distinct factors were linked to declines in dissolved oxygen. When low-oxygen water from hippo pools mixes with upstream river water, it reduces the river's overall dissolved oxygen concentration. At the same time, hippo pool sediments that are washed out during flushing flows continue to use up oxygen as they decompose downriver.

This research suggests that altering a river's flow regime through dams or water withdrawals could have ecological consequences in African rivers with hippos. Coauthor David Post of Yale University explains, "In the Mara River system, flushing flows are important for cleaning hippo waste out of pools, but the accumulated toxic chemicals and deoxygenated water have severe impacts on aquatic life downstream."

Although periodic fish kills might sound like a bad thing, the team observed that the dead fish provided a food source for scavengers like birds and crocodiles.

The study contributes to our understanding of a river system with large hippo populations, which was likely much more common before hippos were eliminated from much of their historical range.

Lead author Christopher Dutton of Yale University explains, "There's this idea that pristine rivers are not supposed to have dissolved oxygen crashes, but we think this is because generations of scientists have studied places that no longer have intact large wildlife populations, whereas the Mara River is unique because it does. This system offers a window into the past and illustrates how ecosystems might have functioned before human impacts."

Funding for this research was provided by the US National Science Foundation, the National Geographic Society, the Yale Tropical Resources Institute, the Lindsay Fellowship for Research in Africa, the Yale Institute for Biospheric Studies, the Yale MacMillan Center for International and Area Studies, and the Robert and Patricia Switzer Foundation. 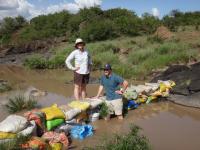