An iconic moment in the history of Hollywood movie magic was born in the 1939 film The Wizard of Oz when Judy Garland as Dorothy Gale stepped out of the black and white world of Kansas into the rainbow colored world of Oz. An iconic moment in the history of infrared imaging may have been born with the announcement of the first technique to offer full color IR tomography.

A collaboration between researchers at the U.S. Department of Energy's Lawrence Berkeley National Laboratory (Berkeley Lab) and the University of Wisconsin-Milwaukee (UWM) has combined Fourier Transform Infrared (FTIR) spectroscopy with computed tomography (CT-scans) to create a non-destructive 3D imaging technique that provides molecular-level chemical information of unprecedented detail on biological and other specimens with no need to stain or alter the specimen.

"The notion of having the colors in a 3D reconstructed image being tied to real chemistry is powerful," says Michael Martin, an infrared imaging expert at Berkeley Lab's Advanced Light Source, a DOE national user facility. "We've all seen pretty 3D renderings of medical scans with colors, for example bone-colored bones, but that's simply an artistic choice. Now we can spectrally identify the specific types of minerals within a piece of bone and assign a color to each type within the 3D reconstructed image."

Martin is one of two corresponding authors of a paper describing this research in the journal Nature Methods titled "3D Spectral Imaging with Synchrotron Fourier Transform Infrared Spectro-microtomography." The other corresponding author is UWM physicist Carol Hirschmugl, Director of the Laboratory for Dynamics and Structure at Surfaces and a principal investigator with UW-Madison's Synchrotron Radiation Center (SRC).

Every individual type of molecule absorbs infrared (IR) light at specific wavelengths that are as characteristic as a human fingerprint. IR spectroscopy can be used to identify the chemical constituents of a sample and the application of the Fourier-transform algorithm allows all IR fingerprints to be simultaneously recorded. FTIR spectroscopy is especially valuable for imaging proteins and other biological samples because it is non-destructive and can be performed without altering the sample. Martin and Hirschmugl and their colleagues have combined FTIR with computed tomography, the technique for reconstructing 3D images out of multiple cross-sectional slices, to achieve what is believed to be the first demonstration of FTIR spectro-microtomography.

"FTIR spectro-microtomography involves low-energy IR photons that do not affect living systems and do not require artificial labels, contrast agents or sectioning," Hirschmugl says. "It greatly enhances the capabilities of both FTIR spectroscopy and CT by creating a full-color spectro-microtomogram in which each voxel contains a complete spectrum (millions of spectra per sample) that provides a wealth of information for advanced spectral segregation techniques such as clustering, neural networks and principal-component analysis."

The success of FTIR spectro-microtomography was enabled by the speed with which 2D FTIR images can be obtained at the SRC's Infrared Environmental Imaging (IRENI) beamline. The SRC is a synchrotron radiation facility that provides infrared, ultra violet, and soft X-ray light for scientific research. IRENI offers one the nation's highest performance IR imaging beamlines through the use of unique focal plane array detectors.

"With capabilities such as those at IRENI, we can obtain hundreds of 2D spectral images as a sample is rotated," Martin says. "For each wavelength, we can then reconstruct a full 3D representation of the sample via computed tomography algorithms."

Martin, Hirschmugl and their colleagues developed a motorized sample mount that precisely rotates the sample while holding it at the focus of an IR microscope. Data col¬lection of 2D spectral transmission images as a function of sample angle is automated, and the computed tomography algorithms allow full reconstructions for every wavelength measured that are then reassembled into a complete spectrum for every voxel.

"We've been able to do a lot of exciting science with 2D FTIR imaging at the diffraction limit using synchrotron infrared beamlines, and it's very exciting to now be able to expand this to true 3D spectroscopic imaging," Martin says. "While the most immediate applications will be in biomedical imaging, I think full color FTIR spectro-microtomography will also be applicable to imaging 3D structures in biofuels, plants, rocks, algae, soils, agriculture and possibly even studies of art history where different layers of paints could be revealed."

The Berkeley Lab and UW researchers have already successfully applied FTIR spectro-microtomography to obtain 3D images of the molecular architecture of the cell walls in a flowering plant – zinnia - and in a woody plant - poplar. A better understanding of the chemical composition and architecture of plant cell walls is critical to the ultimate success of making biofuels from plant biomass. The collaboration also applied FTIR spectro-microtomography to study human hair, which has a distinctive biochemical construction, and an intact grouping of pluripotent mouse stem cells.

"The hair study showed that spectral reconstructions can be done on larger fully hydrated biological samples and that we can spectrally identify a fully buried portion of the sample," Hirschmugl says. "The mouse study shows that our technique has promise not only for stem cell screening without the use of dyes or probes, but also for promoting a better understanding of the biochemical structure of differentiating stem cells in their microenvironment."

The collaborators are continuing to improve the efficiency by which they can collect and analyze FTIR spectro-microtomography with new advances being incorporated at IRENI and at IR beamline 5.4 of Berkeley Lab's Advanced Light Source (ALS), a project being overseen by Martin. The work at the ALS is being done in collaboration with Berkeley Lab's National Energy Research Scientific Computing Center (NERSC).

For more about the Advanced Light Source go here

For more about the Synchrotron Radiation Center go here 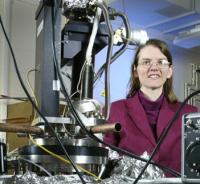