New Haven, Conn. — A missing link in the evolution of the front claw of living scorpions and horseshoe crabs was identified with the discovery of a 390 million-year-old fossil by researchers at Yale and the University of Bonn, Germany.

The specimen, named Schinderhannes bartelsi, was found fossilized in slate from a quarry near Bundenbach in Germany, a site that yields spectacularly durable pyrite-preserved fossils — findings collectively known as the Hunsrück Slate. The Hunsrück Slate has previously produced some of the most valuable clues to understanding the evolution of arthropods – including early shrimp-like forms, a scorpion and sea spiders as well as the ancient arthropods trilobites.

"With a head like the giant Cambrian aquatic predator Anomalocaris and a body like a modern arthropod, the specimen is the only known example of this unusual creature," said Derek Briggs, director of Yale's Peabody Museum of Natural History and an author of the paper appearing in the journal Science.

Scientists have puzzled over the origins of the paired grasping appendages found on the heads of scorpions and horseshoe crabs. The researchers suggest that Schinderhannes gives a hint. Their appendages may be an equivalent to those found in the ancient predatory ancestor, Anomalocaris — even though creatures with those head structures were thought to have become extinct by the middle of the Cambrian Period, 100 million years before Schinderhannes lived.

The fossil's head section has large bulbous eyes, a circular mouth opening and a pair of segmented, opposable appendages with spines projecting inward along their length. The trunk section is made up of 12 segments, each with small appendages, and a long tail spine. Between the head and trunk, there is a pair of large triangular wing-like limbs — that likely propelled the creature like a swimming penguin, according to Briggs. Unlike its ancestors from the Cambrian period, which reached three feet in length, Schinderhannes is only about 4 inches long.

This finding caps almost 20 years of study by Briggs on the Hunsrück Slate. "Sadly, the quarry from which this fabulous material comes has closed for economic reasons, so the only additional specimens that are going to appear now are items that are already in collectors' hands and that may not have been fully prepared or realized for what they are," said Briggs.

Other authors of the paper are Gabriele Kühl and Jes Rust at the University of Bonn, Germany. Funding for the research was from the German Science Foundation and the Humboldt Foundation. Background information on Anomalocaris and the Hunsrück Slate are available online. 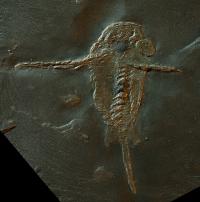 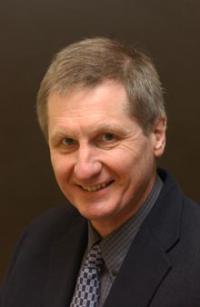