Researchers from the Hubrecht Institute and Utrecht University generated an in-depth description of the human hormone-producing cells of the gut, in a large collaborative effort with other research teams. The results are presented in the scientific journal Cell on the 13th of May. These cells are hard to study, as they are very rare and unique to different species of animals. The researchers developed an extensive toolbox to study human hormone-producing cells in tiny versions of the gut grown in the lab, called organoids. These tools allowed them to uncover secrets of the human gut, for example which potential hormones can be made by the gut and how the secretion of these hormones is triggered. These findings offer potential new avenues for the treatment of diseases such as type 2 diabetes and obesity.

Did you ever wonder where that sudden feeling of hunger comes from when your empty stomach rumbles? Thousands of hormone-producing cells, or enteroendocrine cells, scattered throughout your stomach and intestine just released millions of tiny vesicles filled with the hunger hormone ghrelin into your bloodstream.

Hormones such as ghrelin act as the gut's primary method of communication and coordination with other organs such as the pancreas and the brain. In response to food components and bacteria in the gut, different types of enteroendocrine cells produce different hormones. These hormones can induce hunger or satiety, coordinate movement of intestinal muscles and stimulate the repair of the intestine's protective cell layer.

Another effect to these hormones can be to increase the release of insulin from the pancreas, which is especially interesting in patients with type II diabetes. These patients are unable to produce sufficient insulin to stabilize their glucose levels on their own. One of the most successful treatments for type 2 diabetes is actually based on a gut hormone, called GLP1. With this treatment some patients are able to control their blood glucose without the need of insulin injections.

Enteroendocrine cells only comprise about 1% of the lining of the gut. To complicate this further, more than 20 different hormones are produced by at least 5 subtypes of these enteroendocrine cells of which some are even more rare. This would mean you would have to look at more than 1000 cells to find an enteroendocrine cell that makes a specific hormone. This makes it very difficult to study how these cells exactly respond to the food in your gut.

Most of our knowledge on enteroendocrine cells is derived from studies in mice. However, mice have a different diet and are therefore likely to sense other signals from their food. The differences are so striking that the counterparts of some human gut hormones do not even exist in mice.

The team in the research group of Hans Clevers at the Hubrecht Institute overcame these issues, the rarity of enteroendocrine cells and the differences between mice and humans, in a creative way. They used intestinal organoids, tiny intestines that they can grow in the lab from human stem cells, and increased the activity of a gene called neurogenin-3. This dramatically increased the number of enteroendocrine cells in these mini-intestines, while still generating all the different subtypes of these cells.

To be able to study all the specific types of enteroendocrine cells, the researchers used another trick that was recently developed in the group of Hans Clevers. Clevers: "In our lab, we have optimized genetic engineering of organoids. We were therefore able to label the hormones that are made by the enteroendocrine cells in different colors and create a biobank of mini-intestines, called the EEC-Tag biobank, in which different hormones are tagged with different colors." When an enteroendocrine cell starts producing a labeled hormone, that cell will appear in the corresponding color. The researchers can use the EEC-Tag biobank to study ten major hormones and different combinations of these hormones within the same organoid.

Joep Beumer (Hubrecht Institute): "Marking all major gut hormones with colors allows us to selectively collect any subset of enteroendocrine cells and study even the rarest enteroendocrine cell types. Combining the EEC-Tag biobank with other cutting-edge techniques allowed us to gain deep insights into the biology of hormone production in the human intestine."

For the first time, the researchers described all the genes that are active in the different types of human enteroendocrine cells, using a technique called single-cell sequencing. Based on these data they created an atlas with the deepest insights to date into the different subtypes of human enteroendocrine cells. The atlas revealed the activity of genes pivotal to the function of enteroendocrine cells that were not described before. For example, new receptors were identified that these cells can use to sense food and release their hormones. Other discoveries include potential hormones that have never been identified in the gut before.

"With the EEC-Tag biobank we can measure hundreds of cells for each enteroendocrine cell subtype. The resulting atlas is a gold mine full of fascinating relationships between hormones, receptors and other genes used by well-defined subsets of enteroendocrine cells, which opens many new directions for future studies," says Jens Puschhof (Hubrecht Institute).

The key characteristic of enteroendocrine cells are the active hormones they secrete. To directly measure these hormones, the researchers collaborated with the group of Wei Wu at Utrecht University. The researchers in this group are specialists at mass spectrometry, a very sensitive method to identify different molecules. In the collection of molecules produced by the mini-intestines, they found many new molecules for which it was unknown that they are secreted in the intestine. These new molecules may have functions in our bodies' response to food that are so far unknown. This discovery underlines our limited knowledge of the hormones produced in our gut and will inspire more detailed studies into the functions of these molecules.

Wei Wu (Utrecht University): "Gut secretions contain a mix of hormones that can be either active or inactive. For the first time, we characterize this diversity in human mini-intestines, to reveal also if these hormones are processed into active functional pieces. Hormone activation is not determined by genes, but rather by the processing of the hormones afterwards. Therefore, this may also hint at an exciting route of intervention for broad-spectrum applications, such as controlling hunger or treating diabetes."

With all these data and tools at hand, researchers can now do large scale screens to study which molecules in our food are sensed by which types of enteroendocrine cells, how the enteroendocrine cells actually sense these molecules, and which hormones are produced as a response. Clevers: "The combined ability to make large numbers of all human enteroendocrine cells and track the subtypes using fluorescent colors in organoids makes it possible to perform screens for drug targets that may harness the therapeutic potential of enteroendocrine cells". This work paves the way for further investigation of the largest hormone-producing organ in our body and may eventually lead to treatments for people affected by obesity and diabetes.

Wei Wu is assistant professor in the department of Biomolecular Mass Spectrometry and Proteomics at the Bijvoet Center for Biomolecular Research and Utrecht, Institute for Pharmaceutical Sciences, Utrecht University.

A deep look into the gut's hormones 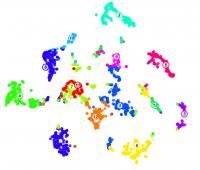 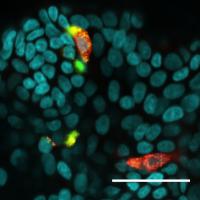 Mini-Intestine with the Hormone Motilin in Green and Red