Rice is the most consumed staple food in the world. It is especially common in Asia, where hunger concerns are prevalent.

Rice is classified as an annual plant, which means it completes its life cycle within one growing season then dies. However, in some tropical areas, rice can continue to grow year after year when taken care of properly.

Just as grass grows back in a lawn after it is mowed, rice can be cut after it is harvested, and the plant will regrow. The farming practice of cutting the rice above ground and allowing it to regrow is called ratooning.

In many areas of the world where rice is grown, a long growing season isn't a problem due to the tropical climates. But in Japan, cooler weather means rice ratooning has been a rare farming practice.

Hiroshi Nakano and a research team set out to learn more about the potential of ratooning to help Japanese rice farmers. Nakano is a researcher at the National Agriculture and Food Research Organization.

Average temperatures in Japan have been higher in recent years. As climate change continues to affect the region, rice farmers may have a longer window for growing rice. "Rice seedlings will be able to be transplanted earlier in the spring, and farmers can harvest rice later into the year," explains Nakano.

"The goal of our research is to determine the effects of harvest time and cutting height of the first harvest on the yield of the first and second rice crops," says Nakano. "Ultimately, we want to propose new farming strategies to increase yield as farmers in southwestern Japan adjust to climate change."

During the study on rice ratooning, researchers compared two harvest times and two cutting heights of the first crop. After the first harvest, they collected the seeds from the cut off portions of the rice plants. Researchers measured the yield by counting and weighing the seeds. The second harvest of rice was done by hand and the yield was determined in the same way.

The total grain yield and the yields from the first and second crops were different depending on the harvest times and cutting heights. This wasn't too surprising, since the team already knew harvest time and height affected yield.

"At both harvest times, rice harvested at the high cutting height had a higher yield than the low cutting height," says Nakano. That's because the plants cut at a higher height had access to more energy and nutrients stored in their leaves and stems.

"Our results suggest that combining the normal harvest time with the high cutting height is important for increasing yield in rice ratooning in southwestern Japan and similar climate regions," says Nakano. "This technology will likely increase rice grain yield in new environments that arise through global climate change."

Learn more about this research in Agronomy Journal. This work was supported by the National Agriculture and Food Research Organization (NARO). 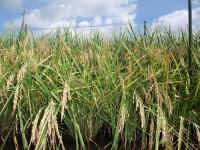 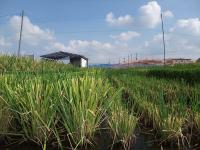