Every few years, NASA creates Space Technology Research Institutes (STRI) in areas it believes are going to be strategic for future technology and space missions. Today, that area is electric propulsion - the use of electrical energy to accelerate propellant to create thrust. The technology yields extremely efficient thrusters to power space flight for gateway launches to the moon or even shuttling massive loads of cargo to Mars.

The Georgia Institute of Technology, along with 11 partner universities and 17 researchers, will receive $15 million over five years to fund the Joint Advanced Propulsion Institute (JANUS) - a new STRI to develop strategies and methodologies to surmount limitations in ground testing of high-power electric propulsion systems.

Mitchell Walker, professor in the Daniel Guggenheim School of Aerospace Engineering, is the principal investigator and will serve as director of JANUS, leading an interdisciplinary team of researchers from across the country. According to the original proposal, the vision of JANUS is to enable and proliferate the flight of high-power electric propulsion systems.

Beginning in October 2021, JANUS will tackle core challenges to electric propulsion ground testing. Other on-the-ground challenges will also be examined, including pressure in the vacuum facility, material erosion and deposits, and electrical circuits that don't exist in space the way they do on Earth. Walker aims to overcome these infrastructure issues to better understand how researchers can test the engines on the ground and extrapolate that data for use in space.

"The challenge is that in order to get electric propulsion devices big enough to push spacecraft and cargo to their destination fast enough for future NASA missions, the engines will be bigger than what we know how to test on the ground," Walker said. "JANUS will address the infrastructure challenges to ensure accurate ground testing and data translation to create electrical propulsion that powers space travel."

For the last 25 years, electric propulsion researchers have known that ground testing was an issue. Until now, however, there has never been a dedicated group of researchers across multiple fields from different universities working together to solve the problem.

"JANUS is important because we are bringing together the people who are experts in all the pieces of the problem," Walker said. "Together, we as researchers can work side by side to actually have a complete answer and understanding of what to do next. We can then give our electric propulsion testing answers to the community, not just NASA, but the Department of Defense and all the industrial players. If we get this right in the U.S., this is going to be an international standard for how to do the testing. And it's going to move everyone forward."

Serving alongside Walker are four leads who focus specifically on diagnostics and fundamental studies (Joshua Rovey and John Williams), physics-based modeling and integration (Richard Wirz), and pressure electrical facility effects (Benjamin Jorns). Walker has assembled this team to ensure that all researchers are contributing to specific areas of the Research Institute, tapping into everyone's areas of expertise. He also believes this management model will keep them engaged as the research pivots.

For Walker, running JANUS will be a culminating achievement to his 16-year research career in electric propulsion. Before now, he hasn't had the opportunity to work in tandem with some of the most talented researchers in the world on a ubiquitous research challenge.

"JANUS is a dream come true for me," he said. "You get to work with the very best people in the country on the most relevant problems, and the students who come out of this will set the course for the field for the next 20 to 30 years. It's a great time to make a lasting impact and legacy in the field."

Another focus for Walker with JANUS is proactively enhancing diversity, equity, and inclusion across the research enterprise.

"Team members from Clark Atlanta University, City Colleges of Chicago, and Chicago State bring a unique perspective," he said. "We chose those institutions because of their existing strengths in materials characterization, expertise that we needed. And then we incorporated many different pathways for undergraduate students from those institutions to contribute to the science. They were an inherent part of the value of the proposal."

Over the next three years, Walker's team will use uncertainty quantification and sensitivity analysis of the overall thruster performance and life models to drive and accelerate the modeling and experimental inquiries.

"We are expecting some really phenomenal results after three years, and in our proposal, we identify that they will help us pivot our research direction based on the true problems and unknowns we discover," Walker said. "These unknowns could be pressure effects, erosion processes, electrical issues, and instability problems."

For the final two years of the grant, the JANUS team plans to deliver new tools, strategies, and guidelines for evaluating existing infrastructure and designing new infrastructure for testing high-power electric propulsion. These include validated models for the response of thrusters to the vacuum facility, new physics-based standards for testing and modeling that encapsulate best practices for mitigating or compensating for facility effects, and new standardized diagnostic techniques for characterizing the effects of the facility on thruster operation.

The work of many Georgia Tech staff and faculty members went into the creation of Walker's proposal, including Ming "Millie" Wang in the George W. Woodruff School of Mechanical Engineering and Kristal Thompson-Black in the Guggenheim School of Aerospace Engineering, who provided significant support in assembling the budget for this proposal. Rebecca Terns, Ph.D., and Brian James in the Office of Research Development helped managed the assembly and submission of the Institute proposal.

The Institute offers business, computing, design, engineering, liberal arts, and sciences degrees. Its nearly 40,000 students, representing 50 states and 149 countries, study at the main campus in Atlanta, at campuses in France and China, and through distance and online learning.

As a leading technological university, Georgia Tech is an engine of economic development for Georgia, the Southeast, and the nation, conducting more than $1 billion in research annually for government, industry, and society. 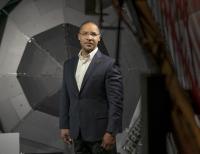