Researchers report evidence that Amazonian parrots were imported to Atacama Desert communities and that the parrots were raised for their colorful feathers. The feathers of tropical birds were signs of wealth and status in pre-Columbian Andean societies. However, understanding of the import networks that brought the feathers to the Andes from the Amazon is incomplete. José M. Capriles and colleagues examined 27 complete and partially mummified and skeletonized remains of at least six species of parrots from five archaeological sites in the Atacama Desert of northern Chile. The authors conducted radiocarbon dating, isotope-based diet reconstructions, and analysis to determine the species of each set of remains. The results suggest that during the Late Intermediate Period, between 1100 and 1450 CE, communities in the Atacama Desert acquired scarlet macaws and at least five additional parrot species from the Amazonian tropics, more than 500 km east. Dietary analysis revealed that many of these parrots were likely fed maize-based foods, cultivated with manure from seabirds. Well-preserved birds showed evidence suggestive of frequent plucking, as well as trimming of overgrown beaks and claws. According to the authors, the results show how the tropical birds may have been transported to the Atacama Desert and cared for in the arid environment for the production of culturally important feathers.

Parrot-rearing in the pre-Columbian Atacama Desert

Detail of mummified blue-fronted amazon recovered from Pica 8 cemetery in the Atacama Desert. 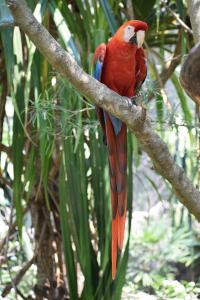