Shortly after dinosaurs like Tyrannosaurus and Triceratops went extinct 65 million years ago, Earth's ancient landscapes were filled with unusual mammals only distantly related to those alive today. Until recently, one of these creatures, Ernanodon antelios, was only known from a single, highly distorted specimen that raised many questions about its habits and evolutionary relationships. In the most recent issue of the Journal of Vertebrate Paleontology, scientists describe a second specimen of Ernanodon that sheds new light on this curious beast from the dawn of the "Age of Mammals."

The remarkable new skeleton comes from rocks in Mongolia that were deposited 57 million years ago during a period known as the Paleocene Epoch.

"Ernanodon is a unique find and represents one of the most complete skeletons ever collected from the Paleocene of the Naran Bulak locality," said Alexander Agadjanian of the Borissiak Paleontological Institute of the Russian Academy of Sciences, co-author of the study.

The first specimen was discovered by a team of Soviet paleontologists in 1979 but remained unstudied for more than thirty years. The new specimen preserves most of the arms, legs, and backbone of the badger-sized animal, including many bones that were not preserved in the first specimen. The authors of the new study made detailed comparisons among the bones of Ernanodon and those of modern mammals and concluded that Ernanodon was highly specialized for digging. It may have dug for food, for shelter, or both.

"Only a handful of Asian Paleocene mammals are known by their postcranial skeleton, which makes Ernanodon a unique source of very important information about its habits, lifestyle, and affinities," said Peter Kondrashov of A.T. Still University of Health Sciences, lead author of the study.

The strong limbs and large claws of Ernanodon, combined with its unusual, simplified teeth, have caused much confusion about its evolutionary relationships. Some scientists thought Ernanodon was an ancient relative of modern armadillos and anteaters, whereas other scientists thought Ernanodon was more closely related to a group of African and Asian ant-eating mammals known as pangolins or "scaly anteaters." The new study concludes that Ernanodon was a closer relative of pangolins than armadillos and anteaters, but that it represents a very early side branch of the pangolin family tree.

"Few other fossil mammals presented as many controversies in the scientific world as Ernanodon did and we are glad the new skeleton helped us resolve them," Kondrashov added.

Founded in 1940 by thirty-four paleontologists, the Society now has more than 2,300 members representing professionals, students, artists, preparators, and others interested in VP. It is organized exclusively for educational and scientific purposes, with the object of advancing the science of vertebrate paleontology. http://www.vertpaleo.org 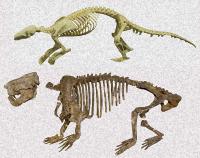