It's a common sight: pelicans gliding along the waves, right by the shore. These birds make this kind of surfing look effortless, but actually the physics involved that give them a big boost are not simple.

Researchers at the University of California San Diego have recently developed a theoretical model that describes how the ocean, the wind and the birds in flight interact in a recent paper in Movement Ecology.

UC San Diego mechanical engineering Ph.D. student Ian Stokes and adviser Professor Drew Lucas, of UC San Diego's Department of Mechanical and Aerospace Engineering and Scripps Institution of Oceanography, found that pelicans can completely offset the energy they expend in flight by exploiting wind updrafts generated by waves through what is known as wave-slope soaring. In short, by practicing this behavior, sea-birds take advantage of winds generated by breaking waves to stay aloft.

The model could be used to develop better algorithms to control drones that need to fly over water for long periods of time, the researchers said. Potential uses do not stop there.

"There's a community of biologists and ornithologists that studies the metabolic cost of flight in birds that can use this and see how their research connects to our estimates from theory. Likewise, our model generates a basic prediction for the winds generated by passing swell, which is important to physicists that study how the ocean and atmosphere interact in order to improve weather forecasting," Stokes said.

"This is an interesting project because it shows how the waves are actually moving the air around, making wind. If you're a savvy bird, you can optimize how you move to track waves and to take advantage of these updrafts. Since seabirds travel long distances to find food, the benefits may be significant," Lucas said.

Stokes and Lucas are, of course, not the first scientists to study the physics of the atmosphere that pelicans and other birds are hardwired to intuit so they can conserve energy for other activities. For centuries, humans have been inspired by the sight of birds harnessing the power and patterns of the winds for soaring flight.

That's how it started with Stokes, who is now in the second year of his PhD at UC San Diego. As a UC Santa Barbara undergraduate, Stokes, a surfer and windsurfer in his off hours, needed a project for his senior physics class and thought of the birds that would accompany him on the waves. When he looked closer, he appreciated the connection between their flight dynamics and the study of environmental fluid dynamics, a speciality of scientists at UC San Diego. The project ultimately turned into a master's thesis with Lucas, drawing inspiration from oceanographers at Scripps who seek to understand the interactions between the ocean and atmosphere.

Wave-slope soaring is just one of the many behaviors in sea-birds that take advantage of the energy in their environment. By tapping into these predictable patterns, the birds are able to forage, travel, and find mates more effectively.

"As we appreciate their mastery of the fluid, ever-changing ocean environment, we gain insight into the fundamental physics that shape our world," said Lucas.

The wave beneath their wings 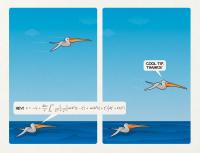 Illustration: the Math behind Pelican Flight