The universe is filled with magnetic fields. Understanding how magnetic fields are generated and amplified in plasmas is essential to studying how large structures in the universe were formed and how energy is divided throughout the cosmos.

An international collaboration, co-led by researchers at the University of Rochester, the University of Oxford, and the University of Chicago, conducted experiments that captured for the first time in a laboratory setting the time history of the growth of magnetic fields by the turbulent dynamo, a physical mechanism thought to be responsible for generating and sustaining astrophysical magnetic fields. The experiments accessed conditions relevant to most plasmas in the universe and quantified the rate at which the turbulent dynamo amplifies magnetic fields, a property previously only derived from theoretical predictions and numerical simulations. The rapid amplification they found exceeds theoretical expectations and could help explain the origin of the present-day large-scale fields that are observed in galaxy clusters. Their results were published on March 8 in the Proceedings of the National Academy of Sciences.

The researchers--part of the Turbulent Dynamo (TDYNO) team--conducted their experimental research at the Omega Laser Facility at the University of Rochester's Laboratory for Laser Energetics (LLE), where they had previously demonstrated experimentally the existence of the turbulent dynamo mechanism. That breakthrough earned the team the 2019 John Dawson Award for Excellence in Plasma Physics Research from the American Physical Society.

In their most recent experiments at the Omega Laser Facilty, the researchers used laser beams whose total power is equivalent to that of 10,000 nuclear reactors. They were able to achieve conditions relevant to the hot, diffuse plasma of the intracluster medium in which the turbulent dynamo mechanism is thought to operate. The team then measured as a function of time the magnetic field amplification produced by this mechanism.

"Understanding how and at what rates magnetic fields are amplified at macroscopic scales in astrophysical turbulence is key for explaining the magnetic fields seen in galaxy clusters, the largest structures in the Universe," says Archie Bott, a postdoctoral research associate in the Department of Astrophysical Sciences at Princeton and lead author of the study. "While numerical models and theory predict fast turbulent dynamo amplification at very small scales compared to turbulent motions, it had remained uncertain as to whether the mechanism operates rapidly enough to account for dynamically significantly fields on the largest scales."

At the core of the astrophysical dynamo mechanism is turbulence. Primordial magnetic fields are generated with strengths that are considerably smaller than those seen today in galaxy clusters. Stochastic plasma motions, however, can pick up these weak "seed" fields and amplify their strengths to significantly larger values via stretching, twisting and folding of the field. The rate at which this amplification happens, the "growth rate," differs for the different spatial scales of the turbulent plasma motions: theory and simulations predict that the growth rate is large at the smallest length scales but far smaller at length scales comparable to those of the largest turbulent motions. The TDYNO experiments demonstrated that this may not be the case: turbulent dynamo--when operating in a realistic plasma--can generate large-scale magnetic fields much more rapidly than currently expected by theorists.

"Our theoretical understanding of the workings of turbulent dynamo has grown continuously for over half a century," says Gianluca Gregori, a professor of physics in the Department of Physics at the University of Oxford and the experimental lead of the project. "Our recent TDYNO laser-driven experiments were able to address for the first time how turbulent dynamo evolves in time, enabling us to experimentally measure its actual growth rate."

These experiments are part of a concerted effort by the TDYNO team to answer key questions that are debated in the turbulent dynamo literature, establishing laboratory experiments as a component in the study of turbulent magnetized plasmas. The collaboration has built an innovative experimental platform that, coupled with the power of the OMEGA laser, enables the team to probe the different plasma regimes relevant to various astrophysical systems. The experiments are designed using numerical simulations performed with the FLASH code, a publicly available simulation code that can accurately model laser-driven experiments of laboratory plasmas. FLASH is developed by the Flash Center for Computational Science, which recently moved from the University of Chicago to the University of Rochester.

"The ability to do high-fidelity, predictive modeling with FLASH, and the state-of-the art diagnostic capabilities of the Omega Laser Facility at the LLE, have put our team in a unique position to decisively advance our understanding of how cosmic magnetic fields come to be," says Petros Tzeferacos, an associate professor in the Department of Physics and Astronomy at the University of Rochester and a senior scientist at the LLE--the simulation lead of the project. Tzeferacos also serves as director of the Flash Center at Rochester.

"This work blazes a path to laboratory investigations of a variety of astrophysical processes mediated by magnetized turbulence," adds Don Lamb, the Robert A. Millikan Distinguished Service Professor Emeritus in Astronomy and Astrophysics at the University of Chicago and principal investigator of the TDYNO National Laser User's Facility (NLUF) project. "It's truly exciting to see the scientific results that the ingenuity of this team is making possible."

Laser-driven experiments provide insights into the formation of the universe 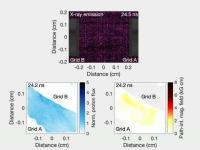