Mass losses of the Antarctic Ice Sheet have increased global sea level by 7.6 mm since 1992, with 40% of this rise (3.0 mm) coming in the last five years alone. In West Antarctica, mass losses today amount to about 160 billion tons per year.

The findings are from a major climate assessment known as the Ice Sheet Mass Balance Inter-comparison Exercise (IMBIE), and are published on 14 June in Nature. It is the most complete picture of Antarctic ice sheet change to date - 84 scientists from 44 institutions combined 24 satellite surveys to produce the assessment.

Ludwig Schröder explained: "Altimeter satellites measure the surface elevation of the ice sheet. We analyzed data from five consecutive satellite missions in order to derive changes over the full 25-year period from 1992 to 2017." Schröder was one of just two contributors to deliver such a comprehensive dataset.

Andreas Groh added: "Analyzing tiny changes of Earth's gravitational attraction is another method to infer ice mass changes. We analyzed data from the GRACE satellite mission. GRACE stands for Gravity Recovery and Climate Experiment. The results, together with thorough uncertainty assessments, have been accessible through an open data portal for a while. They were now incorporated into the study." The portal is available under data1.geo.tu-dresden.de.

One of the two lead authors of the study, Dr. Erik Ivins at NASA Jet Propulsion Laboratory in Pasadena, California, currently being at a research stay at Prof. Horwath's institute at TU Dresden, commented the study: "The added duration of the observing period, the larger pool of participants, various refinements in our observing capability and an improved ability to assess both inherent and interpretive uncertainties, each contribute to making this the most robust study of ice mass balance of Antarctica to date."

A mass of one billion tonnes corresponds to a cubic kilometer of water. If continental ice sheets lose 100 billion tonnes of mass mean sea level will rise by 0.28 mm. 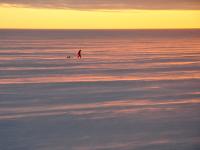