Following nearly 5 years of exploration in mountainous areas of the southern Brazilian Atlantic Rainforest, a team of researchers has uncovered seven new species of a highly miniaturized, brightly colored frog genus known as Brachycephalus. Each species is remarkably endemic, being restricted to cloud forests in one or a few adjacent mountaintops, thus making them highly vulnerable to extinction, particularly due to shifts in the distribution of cloud forest due to climate change.

The Atlantic Rainforest of Brazil harbors a highly unique group of frogs that have intrigued naturalists for over a century. Known as Brachycephalus, these frogs are among the smallest terrestrial vertebrates, with adult sizes often not exceeding 1 cm in length, leading to a variety of changes in their body structure, such as reduction in the number of toes and fingers. In addition, many species of Brachycephalus are brightly colored, possibly as a warning to the presence of a highly potent neurotoxin in their skin known as tetrodotoxin.

Most species of Brachycephalus are highly endemic, being found exclusively on one, or a few, adjacent mountaintops. Such high levels of endemism is caused by their adaptation to a specific kind of habitat - the cloud forests - which simultaneously prevents them from migrating across valleys and promotes the formation of new species.

The first species of Brachycephalus was described in 1842 by the famous German naturalist Johann Baptist von Spix, yet most species in the genus have been discovered only in the past decade, particularly due to their highly endemic nature and the difficulty in reaching remote montane sites. Over the course of five years of fieldwork, a team of researchers has provided the largest addition to the known diversity of Brachycephalus, with seven new species.

"Although getting to many of the field sites is exhausting, there was always the feeling of anticipation and curiosity about what new species could look like", said Marcio Pie, a professor at the Universidade Federal do Paraná, who led the project.

Luiz Ribeiro, a research associate to the Mater Natura Institute for Environmental Studies, is optimistic about the prospects for future studies "This is only the beginning, especially given the fact that we have already found additional species that we are in the process of formally describing."

A major concern regarding the new species is that the same factors that led to their endemism might also be a ticket to their extinction. Cloud forests are highly sensitive to climatic changes, and the long-term preservation of these species might involve not only the protection of their habitats but also more direct management efforts, such as rearing in captivity.

The study, titled "Seven new microendemic species of Brachycephalus (Anura: Brachycephalidae) from southern Brazil", was published today in PeerJ, a peer-reviewed open access journal in which all articles are freely available to everyone.

PDF of this Press Release: http://static.peerj.com/pressReleases/2015/PressReleasePeerJ_Ribeiro.pdf

PeerJ has an Editorial Board of over 1,000 respected academics, including 5 Nobel Laureates. PeerJ was the recipient of the 2013 ALPSP Award for Publishing Innovation.

Brachycephalus (Anura: Brachycephalidae) is a remarkable genus of miniaturized frogs of the Brazilian Atlantic Rainforest. Many of its species are highly endemic to cloud forests, being found only on one or a few mountaintops. Such level of microendemism might be caused by their climatic tolerance to a narrow set of environmental conditions found only in montane regions. This restriction severely limits the chance of discovery of new species, given the difficulty of exploring these inaccessible habitats. Following extensive fieldwork in montane areas of the southern portion of the Atlantic Rainforest, in this study we describe seven new species of Brachycephalus from the states of Paraná and Santa Catarina, southern Brazil. These species can be distinguished from one another based on coloration and the level of rugosity of the skin in different parts of their body. These discoveries increase considerably the number of described species of Brachycephalus in southern Brazil. 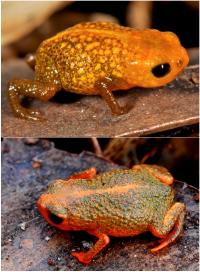 Two of the New Species

View of the Sky Islands