Beer-Sheva, ISRAEL...October 19, 2017 - Ben-Gurion University of the Negev has developed Israel's first autonomous underwater vehicle (AUV). The robotic "HydroCamel II" will be commercially available for use in the military, security, and oil and gas sectors, as well as in environmental applications and marine research.

BGN Technologies Ltd., BGU's technology-transfer company, also announced the formation of a new company, BG Robotics (BGR), to commercialize the HydroCamel II, developed by researchers in BGU's Laboratory for Autonomous Robotics (LAR). Tzvika Goldner was named chief executive officer of the new entity, which will be headquartered in Beer-Sheva, adjacent to the University.

The new technology will be introduced at the NexTech Conference 2017, taking place on October 19th in Beer-Sheva at the Advanced Technologies Park adjacent to the University.

The AUV market according to Markets and Markets will reach $1.2 billion by 2023, increasing annually by 22 percent due to the growing importance of security measures worldwide and expanding offshore oil and gas production. AUVs are being used around the world for underwater exploration, underwater cable layout and inspection, marine biology and geology sampling, archeology, and different types of military uses. Click here to watch a video of the HydroCamel II.

"The autonomous HydroCamel II integrates state-of-the-art technologies, including high-level maneuvering in six degrees of freedom and an ability to dive almost vertically," says Prof. Hugo Guterman of the BGU Department of Electrical and Computer Engineering and head of LAR. "Until now, these capabilities were limited to remotely operated underwater vehicles (ROVs), which must be tethered by an umbilical cable to a host ship for its power and air source. The HydroCamel II is completely autonomous."

The eight-foot-long HydroCamel II AUV combines full autonomy and maneuverability while enabling quick integration of specialized payloads such as sonars, cameras, sensors, and a specimen collection arm. BGR has begun cooperation with payload manufacturers to supply customers with an integrated solution.

"BGR will be offering HydroCamel II at a competitive price compared to other underwater vehicles in the same category," says Goldner. "This gives us a distinct advantage in the market. We believe HydroCamel II will expand the AUV customer base and enable us to deploy AUVs in new areas."

BGN Technologies is the technology company of Ben-Gurion University of the Negev, Israel. BGN Technologies brings technological innovations from the lab to the market and fosters research collaborations and entrepreneurship among researchers and students. To date, BGN Technologies has established over 100 startup companies in biotech, high-tech and cleantech, and initiated leading technology hubs, incubators and accelerators. During the past decade, BGN Technologies focused on creating long-term partnerships with multinational companies such as Deutsche Telekom, Dell-EMC, Lockheed Martin, and PayPal, securing value and growth for BGU and the Negev region. For more information, visit the BGN Technologies website. 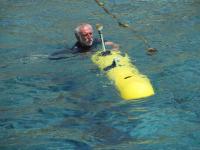