RICHMOND, Va., (June 23, 2021) -- U.S. life expectancy decreased by 1.87 years between 2018 and 2020, a drop not seen since World War II, according to new research from Virginia Commonwealth University, the University of Colorado Boulder and the Urban Institute.

The numbers are even worse for people of color. On average, whereas life expectancy among white Americans decreased by 1.36 years in 2020, it decreased by 3.25 years in Black Americans and 3.88 years in Hispanic Americans.

The data will be released June 23 in The BMJ, a journal published by the British Medical Association.

"When the pandemic came, my naïve assumption was that it would not have a big impact on the preexisting gap between the U.S. and peer countries," said Steven Woolf, M.D., the study's lead author and director emeritus of VCU's Center on Society and Health. "It was a global pandemic, and I assumed that every country would take a hit. What I did not anticipate was how badly the U.S. would fare in the pandemic and the enormous death toll that the U.S. would experience."

The U.S. death toll has surpassed 600,000, according to Johns Hopkins University's Coronavirus Resource Center. Excess deaths, which exceed the official count, may contribute to the impact of the pandemic, according to previous research led by Woolf.

"The gap has been widening for some time," Woolf said. Then COVID-19 hit, and the United States had among the world's highest per-capita mortality rates. Black and Hispanic communities were hit harder than white populations. Woolf's paper is the first to show the significance of the widening life expectancy gaps. Previous reports only included data from the first half of 2020 and did not provide the comparison to peer countries.

"To give some perspective, when the decline in life expectancy was happening a few years ago, it was a decrease of about 0.1 years each year that was making front-page news," said Woolf, VCU's C. Kenneth and Dianne Wright Distinguished Chair in Population Health and Health Equity. "That's the kind of increase or decrease that we're accustomed to each year."

"It's like nothing we've seen since World War II," he said. "1943 was the last time the US had such a large decrease in life expectancy."

Six countries in the authors' comparison group saw their life expectancy increase during 2020 -- places like New Zealand, Finland and Norway. Other countries did poorly: Italy and Spain saw losses in life expectancy. But none came close to the U.S.

"The disorganized handling of the pandemic in the U.S. had a lot to do with governance," said Woolf, a professor in the Department of Family Medicine and Population Health at VCU School of Medicine. "Our Constitution delegates public health authority to states, so we had 50 response plans. Many lives were lost because so many decisions were driven by politics and ideology. COVID-19 exposed a lot of the systemic problems that have been fueling the long-term decline in the health of Americans.

"And when vaccination gets us past the pandemic, and COVID-19 is in the rear view mirror, those systemic issues will still be with us," Woolf said.

Included in those issues are racial health inequities and the role of systemic racism. The most jarring statistic for Woolf was the data on life expectancy for Black and Hispanic Americans. It's well-known that COVID-19 had a disproportionate impact on people of color, but the effect on life expectancy for those groups was "jolting," he said.

Life expectancy in Black men in particular reached its lowest level since 1998.

"It's a big setback because, for many years, the U.S. had been making progress in closing the Black-white mortality gap," Woolf said. "And Hispanic Americans, for many years, enjoyed higher life expectancies than whites, but that advantage was almost completely erased by COVID-19."

Data on Native Americans, who also experienced very high death rates during the pandemic, was not examined in the study because of inadequate data.

"In many ways, the U.S. has turned a corner in its response to COVID-19, but the data emerging on pandemic health disparities is urgent and valuable in helping understand the impact on our communities," said Peter Buckley, M.D., dean of the VCU School of Medicine. "The life expectancy gaps between America and other countries and between racial groups reported in Dr. Woolf's paper are worrisome, and I hope the numbers serve as a wake-up call for the health care community and beyond."

Co-authors on the paper are Ryan Masters, Ph.D., assistant professor at the University of Colorado Boulder, and Laudan Aron, a senior fellow at the Urban Institute.

Woolf receives partial funding from the National Institutes of Health's National Center for Advancing Translational Sciences, which supports the Wright Center for Clinical Translational Research where Woolf serves in a community engagement role.

Virginia Commonwealth University is a major, urban public research university with national and international rankings in sponsored research. Located in downtown Richmond, VCU enrolls more than 30,000 students in 233 degree and certificate programs in the arts, sciences and humanities. Twenty-two of the programs are unique in Virginia, many of them crossing the disciplines of VCU's 11 schools and three colleges. The VCU Health brand represents the VCU health sciences academic programs, the VCU Massey Cancer Center and the VCU Health System, which comprises VCU Medical Center (the only academic medical center in the region), Community Memorial Hospital, Children's Hospital of Richmond at VCU, and MCV Physicians. The clinical enterprise includes a collaboration with Sheltering Arms Institute for physical rehabilitation services. For more, please visit http://www.vcu.edu and vcuhealth.org.

About the VCU C. Kenneth and Dianne Wright Center for Clinical and Translational Research

The Wright Center fosters and supports interdisciplinary human health research at Virginia Commonwealth University and VCU Health by providing the infrastructure and resources that researchers need to accelerate the translation of scientific discoveries into patient care. Through funding, mentorship, training and education, regulatory compliance and data support, the center helps researchers bring treatments to patients and health care providers safely and efficiently. It especially serves to guide and grow a diverse workforce of junior faculty into experienced, multidisciplinary health researchers. In collaboration with those across campus and across the state, the Wright Center also engages the community in clinical research, bridging the gap between the public and health research. The center is funded by the National Institutes of Health, the Wright Foundation, other private donors and VCU. For more, please visit cctr.vcu.edu.

Pandemic drives largest decrease in US life expectancy since 1943 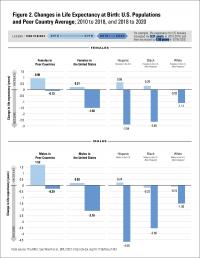