Building the hundreds of hydroelectric dams proposed for the Amazon River Basin will cause massive environmental damage all the way from the eastern slopes of the Andes to the Atlantic Ocean, according to new findings by an international team of researchers that includes a University of Arizona hydrologist.

"The Amazon is the most important river basin on the planet. It's a microcosm of our issues of today involving environment, energy and health of the planet," said co-author Victor Baker, University of Arizona Regents' Professor of Hydrology and Atmospheric Sciences.

The 428 current and proposed dams will have environmental impacts throughout the entire system, the team reports in the June 15 issue of the journal Nature. About one-third of the 428 dams are built or are under construction.

While these hydroelectric dams have been justified for providing renewable energy and avoiding carbon emissions, little attention has been paid to the major disturbances dams present to the Amazon floodplains, rainforests, the northeast coast of South America and the regional climate, the researchers write.

Generally, only the local environmental impact of a dam is considered, not the regional or system-wide effect.

"The river and its individual pieces cannot be separated out," Baker said. "That an individual dam assessment can be separated from the rest of the system isn't scientifically valid."

The research team conducted a large-scale assessment of how the current and future dams will affect the entire Amazon Basin. The researchers developed a Dam Environmental Vulnerability Index to quantify their assessment. The DEVI ranges from one to 100, with 100 being the most vulnerable.

The DEVI incorporates overall changes to the river systems from dams, including the potential land use changes, erosion, runoff, changes in sediment deposition, the effects on the region's rich biodiversity and impacts to the regional food supply.

The researchers found the watershed of the Madeira River, the largest Amazon tributary, will sustain the greatest negative impacts from the current and future dams. The team assigned that region a DEVI above 80.

Lead author Edgardo Latrubesse, a geography and the environment professor at the University of Texas at Austin, said, "The impacts can be not only regional, but also on an interhemispheric scale. If all the planned dams in the basin are constructed, their cumulative effect will trigger a change in sediment flowing into the Atlantic Ocean that may hinder the regional climate."

The paper by Latrubesse, Baker and their 14 colleagues is titled, "Damming the Rivers of the Amazon Basin." A complete list of authors and their affiliations is at the bottom of this news release.

Rivers in the Amazon Basin move like a dance, exchanging sediments across continental distances to deliver nutrients to a mosaic of wetlands, Latrubesse said.

Sediment transported by rivers provides nutrients that sustain wildlife, contribute to the regional food supplies and modulate river dynamics that result in high habitat and biotic diversity for both aquatic and nonaquatic organisms.

Many current and proposed dams are located far upstream in the Andean region. Research indicates the Andes provide more than 90 percent of the sediment to the entire Amazon Basin. Dams trap the nutrient-rich sediment and prevent it from moving downstream.

The Madeira River is home to the most diverse fish population in the Amazon. Since the huge Santo Antônio and Jiaru dams were constructed on the Madeira, the river's average sediment concentration decreased by 20 percent. Researchers expect the 25 dams planned for further upstream will trap additional nutrient-rich sediment behind them.

The largest preserved mangrove region of South America is along the coastline of northeast Brazil and the three Guianas and needs sediment from the Amazon, Latrubesse said.

Baker added that the cumulative impacts from the dams affect rainfall and storm patterns from the Amazon Basin to the Gulf of Mexico. In addition to changes in sediment flow, those impacts include the storage of water behind the dams, the water flows and the timing of flows to the mouth of the river.

The study's authors conclude, "Citizens of the Amazon Basin countries will ultimately have to decide whether hydropower generation is worth the price of causing profound damage to the most diverse and productive river system in the world. If those decisions are made within the context of a comprehensive understanding of the fluvial system as a whole, the many benefits the rivers provide to humans and the environment could be retained."

The authors of the paper, "Damming the rivers of the Amazon Basin," are:

Amazonia's future will be jeopardized by dams 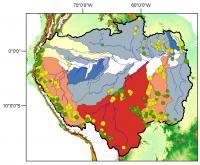