Tropical Storm Vongfong continues to weaken as it tracks across the big islands of Japan, and NASA satellite data showed that westerly wind shear is taking its toll on the storm's structure.

On Oct. 12 at 0500 UTC (1 a.m. EDT), the MODIS instrument aboard NASA's Aqua satellite captured an image of Tropical Storm Vongfong approaching Japan. Despite weakening to a tropical storm, Vongfong still appeared to have an eye as its northeastern quadrant blanketed the large island of Kyushu, Japan. By 11 a.m. EDT, Maximum sustained winds had dropped to 55 knots (63 mph/102 kph). Vongfong was centered near 30.2 north latitude and 128.2 east longitude. That's about 231 nautical miles south-southwest of Sasebo, Japan.

Forecasters at the Joint Typhoon Warning Center (JTWC) noted that the storm's low-level center was exposed to outside winds, an indication that the storm could weaken. The strongest thunderstorms (a tropical cyclone is made up of hundreds of them) were isolated in the eastern quadrant of the storm as a result of strong vertical wind shear. Winds buffeting the storm from the west were blowing as high as 50 knots, pushing those thunderstorms east of the center.

JTWC reported surface observations across Shikoku indicated light core winds. However, winds are stronger along the Shikoku coast sustained up to 35 knots (40 mph/65 kph) with isolated gusts to 56 knots (64.4 mph/103.7 kph) in the southeastern coast.

Vongfong is expected to become extra-tropical and continue moving northeast over Japan and exiting back into the western North Pacific on Oct. 14. 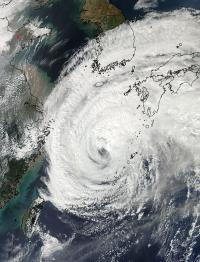