Using a patient's skin cells to restore his vision? Thanks to a promising technique known as cell reprogramming, this science fiction scenario may soon become reality. The technique allows scientists to make stem cells from, for instance, a patient's skin cells. These stem cells - known as induced pluripotent stem cells or iPS cells - can be turned into almost any specialised cell type of the human body, including the cells we need to see.

Working with iPS cells has numerous advantages compared with other methods. For one thing, you use adult cells to make iPS cells, so you no longer need embryos. Furthermore, the reprogrammed cells have the patient's DNA, so the body will be less likely to reject them.

Together with Kathrin Plath from UCLA, Vincent Pasque from KU Leuven led an international study into how adult cells reprogram to iPS cells. To investigate the different stages of the reprogramming process, the researchers separated male and female cells to examine them side by side.

The researchers discovered that female and male cells behave differently after the reprogramming process and that this is due to their different number of X chromosomes - two in female cells and one in male cells.

The differences between male and female iPS cells are most pronounced for one of the key processes in the field of epigenetics: DNA methylation, a modification that changes the activity of a DNA segment without changing its sequence. The researchers found that DNA methylations are erased in female iPS cells but not in male cells.

"Our study also indicates that the path towards iPS cells involves the use of specific control switches on DNA called enhancers," adds Dr Constantinos Chronis from UCLA.

Vincent Pasque concludes: "Our results show that studying male and female cells separately is key to a better understanding of how iPS cells are made. And we really need to understand the process if we want to create better disease models and to help the millions of patients waiting for more effective treatments."

KU Leuven is Europe's most innovative university in the latest Reuters ranking. Located in Belgium, it is dedicated to research, education, and service to society. KU Leuven is a founding member of the League of European Research Universities (LERU) and has a strong European and international orientation. Its scientists conduct basic and applied research in a comprehensive range of disciplines. The university welcomes more than 50,000 students from over 140 countries. The KU Leuven Doctoral Schools train approximately 4,500 PhD students. http://www.kuleuven.be/english 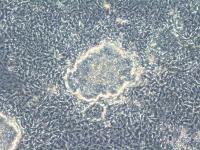