Small groups of meerkats -- such as those commonly seen in zoos and safari parks -- are at greater risk of chronic stress, new research suggests.

Captive meerkats often live in groups so small that they would be very vulnerable in the wild and -- although they are not at risk from predators -- being in a larger group might make them feel safer.

Living in small enclosures and being constantly exposed to high numbers of human visitors also increase stress, according to scientists from the University of Exeter.

The researchers measured stress by looking at hormone levels in the meerkats' droppings.

"Animals in zoos may be stressed despite not showing obvious behavioural problems," said senior author Dr Emma Vitikainen, of the Centre for Ecology and Conservation on the University of Exeter's Penryn Campus in Cornwall. "Meerkat group sizes in captivity tend to be closer to those seen in small unstable groups in the wild, which may represent a stressful condition and predispose meerkats to chronic stress, even in the absence of natural predators. "Our results are consistent with the theory that there is an optimum group size which minimises physiological stress in meerkats, and that zoo meerkats at most risk are those kept in small groups and small enclosures, and those which are exposed to consistently high numbers of visitors."

Lead author Dr Katy Scott, who collaborated closely with the zoos to collect samples, said: "We are grateful for their support and cooperation and we hope these results will be useful to zoos and wildlife parks in caring for their meerkats."

In contrast with data from wild meerkats, the study found that neither sex, age nor dominance status affected stress levels -- possibly because access to food is more equal in captivity.

The research was carried out with help from the German Primate Centre, Leibniz Institute for Primate Research in Göttingen, Germany.

Captive meerkats at risk of stress 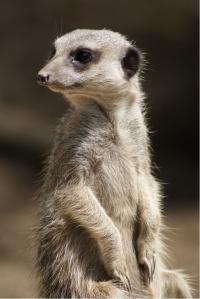