BOULDER, Colo.-- Biophysicists at JILA have measured protein folding in more detail than ever before, revealing behavior that is surprisingly more complex than previously known. The results suggest that, until now, much about protein behavior has been hidden to science--happening on faster timescales and with finer changes in structure than conventional methods could detect.

Protein molecules are chains of amino acids. They fold into three-dimensional shapes that determine their function through a series of intermediate states, like origami. Accurately describing the folding process requires identifying all of the intermediate states.

The JILA research revealed many previously unknown states by unfolding an individual protein. For example, the JILA team identified 14 intermediate states--seven times as many as previously observed--in just one part of bacteriorhodopsin, a protein in microbes that converts light to chemical energy and is widely studied in research.

"The increased complexity was stunning," said project leader Tom Perkins, a National Institute of Standards and Technology (NIST) biophysicist working at JILA, a partnership of NIST and the University of Colorado Boulder. "Better instruments revealed all sorts of hidden dynamics that were obscured over the last 17 years when using conventional technology."

"If you miss most of the intermediate states, then you don't really understand the system," he said.

Knowledge of protein folding is important because proteins must assume the correct 3-D structure to function properly. Misfolding may inactivate a protein or make it toxic. Several neurodegenerative and other diseases are attributed to incorrect folding of certain proteins. Over the last 50 years, protein folding has become the focus of a large, interdisciplinary research field.

Significantly, bacteriorhodopsin is a membrane protein that resides in the boundary between the inside and outside of cells. As a class, membrane proteins are much larger and more difficult to study than globular proteins, which are the focus of most protein folding research.

As described in the March 3, 2017, issue of Science, Perkins and colleagues used an atomic force microscope (AFM) to stretch bacteriorhodopsin and measure its extension (in nanometers) at various pulling speeds (measured in nanometers per second). The new measurements were made possible by JILA's prior development of short, soft AFM probes, which quickly gauge abrupt changes in force--signaling an intermediate state--as a protein unfolds. Further refinements of these probes allowed JILA researchers to probe bacteriorhodopsin 100 times faster (in 1 microsecond) and with 10 times the precision in pulling force of prior work.

The JILA team found that intermediate states were not only more numerous than expected but also lasted as little as 8 microseconds. The findings resolved long-standing discrepancies between past experimental data and molecular simulations, giving confidence to using such simulations to further probe the behavior of membrane proteins.

The JILA team's discovery and techniques could be applied to many other molecular studies, including those of medical interest such as interactions between proteins and medications. More specifically, bacteriorhodopsin's structure is similar to that of proteins involved in many human diseases and targeted by many medicinal drugs. 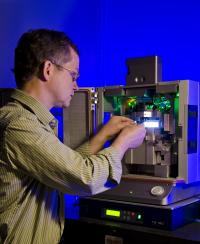