The blood vasculature in the brain is a highly ramified, complex but well-organized vessel network. During development, the pathfinding of growing vessels is critical for the patterning of the brain vasculature. However, its underlying mechanism still remains elusive.

A research team led by Dr. DU Jiulin of the Institute of Neuroscience, Center for Excellence in Brain Science and Intelligence Technology (CEBSIT), Chinese Academy of Sciences, has revealed that Ca2+ activities mediated by mechanosensitive Piezo1 channels regulate the pathfinding of growing brain vessels in larval zebrafish.

Endothelial tip cells (ETCs) located at the forefront of growing vessels usually extend a few motile primary branches and many dynamical fine filopodia, navigate through tissue microenvironments, and steer angiogenic sprouts to their appropriate targets. This process of ETC pathfinding is critical for the proper patterning of the vasculature in the brain as well as in all other organs, but its underlying mechanism still remains largely unknown.

To investigate the cellular and molecular mechanism underlying ETC pathfinding, Dr. DU's group first monitored the entire process of ETC pathfinding during brain vascular development through in vivo long-term time-lapse simultaneous imaging of both the morphological dynamics and Ca2+ activity of ETCs in larval zebrafish.

They found that before reaching target vessels, ETCs frequently extended and retracted subcellular primary branches, leading to continuous changes in the direction of ETC migration and vessel growth.

Finally, the researchers showed that the protease calpain and nitric oxide synthase mediated the effects of Piezo1-mediated Ca2+ activities on ETC branch retraction or extension, respectively.

This study reveals that Piezo1 and downstream Ca2+ signaling act as molecular bases for ETC pathfinding and highlights a novel function of Piezo1 and Ca2+ in vascular development.

The study was published in Neuron on August 21. It was supported by Shanghai Municipality and the Chinese Academy of Sciences.

Discovering the mechanism of brain vascular pathfinding during development 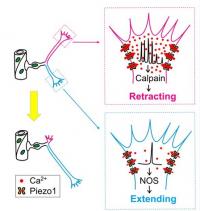