According to the Guinness World Records, the longest any person has held a continuous vocal note is just shy of two minutes. That's quite an achievement.

Compared to the Pacific midshipman fish, however, the endurance of the human vocal cord is no match. Midshipman fish can generate a mating call that emits continuously from their bodies for a full hour.

Biologists have puzzled over how this was possible, as the call requires the fish to contract and relax muscles around their swim bladder very quickly -- 360,000 times in an hour, to be precise -- seemingly too fast for the necessary pumping of calcium ions required for muscle contraction.

A new study led by University of Pennsylvania researchers provides an explanation for this display of physiological fortitude. In an investigation featured on the cover of the Journal of General Physiology, the team discovered that the fish release very small amounts of calcium for each muscle contraction, allowing for a quick re-uptake that enables the process to continue uninterrupted to produce a sustained hum.

"These findings shed light on these fascinating creatures and this extraordinary ability," said Lawrence C. Rome, professor of biology in Penn's School of Arts and Sciences. "And in a broader sense the study opens our eyes to the idea that calcium doesn't always have to go all the way up and down in order to maintain muscle activity. It's something that may apply to other animals that move at high speeds."

During the summer breeding season, male midshipman fish claim rocky nest sites on the sea floor and produce a sustained "hum" or mating call to attract females to spawn. This call can last an hour and reaches frequencies of 100 Hertz, which translates to 100 contractions and relaxations of the muscles around the swim bladder each second.

Scientists have observed the massive muscle growth of these super-fast twitch muscles around the males' swim bladders during the mating season but didn't understand how they could twitch so fast for so long. Each contraction requires the release of calcium ions from a storage vessel called the sarcoplasmic reticulum. Then this calcium must be pumped back in before the next contraction can occur.

For nearly three decades, Rome and colleagues have studied the Atlantic toadfish, which also vibrates its swim bladder to generate a mating call. In that species, the muscles around the swim bladder contract even faster, at rates of as much as 250 times a second, though unlike midshipman they have rest intervals between their calls.

In earlier studies, Rome and colleagues found that toadfish can accomplish this by reducing the amount of calcium they release and by using a protein called parvalbumin, which they possess in abundance, to bind calcium and slowly release it during the rest interval.

"They can't keep up in real time if they release the usual amount of calcium," said Rome. "So they release small amounts; then the parvalbumin binds it and can empty before the next call."

Midshipman do not have large amounts of parvalbumin like toadfish. So the researchers suspected they were enlisting some other strategy to sustain the muscle contractions for an hour. The midshipman were either pumping calcium at a rate much faster than toadfish, or the maximum level of calcium they release is lower, allowing them to pump it back into the sarcoplasmic reticulum fast enough to keep up with the muscle vibrations.

To find out which tack midshipman use, Rome and colleagues took bundles of muscle fibers from male midshipman and experimentally stimulated them, measuring the energy and calcium dynamics. They found that the maximum rate of the calcium pump in midshipman was significantly lower than in toadfish.

That pointed to the explanation that the midshipman were releasing small amounts of calcium, which follow-up studies showed was the case.

"The trick they play is that they release tiny amounts of calcium, about one-eighth of the amount as toadfish," Rome said. "The calcium pumps in operate closer to their maximum in midshipman which allows them to keep up with the tiny calcium releases in real time."

The researchers also discovered that the fish's muscle fibers contract once in response to a single stimulus, unlike the rapid movements seen in some insect species, such as the wings of mosquitoes and bees.

Further studies underscored the sexual dimorphism in the physiology of the swim bladder muscles: Females, which do not produce a call, have very thin white anaerobic muscles compared to the thick red aerobic muscles of the males.

The researchers believe that other characteristics of midshipman contribute to their unusual calling ability, such as a thicker "Z-line," the place where two sarcomeres, or units of muscle fiber come together. They also hyperinflate their swim bladders during calling. Further studies and new technologies that enable scientists to study living animals will also likely shed more light on midshipman as well as other species.

"By looking at a specialized case," said Rome, "we can see mechanisms that might apply more broadly."

The study was supported by the National Science Foundation (Grant IOS-1135981). 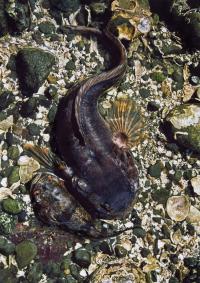