Scientists from the Mechanobiology Institute (MBI) at the National University of Singapore (NUS) have discovered a new mechanism of cell boundary elongation. Elongation and contraction of the cell boundary is essential for directing changes in cell shape, which is required for the correct development of tissues and organs. The study was published in Current Biology on 11 August 2016.

During development of an embryo, cells assemble to form tissues and organs. This requires cells to grow, divide, and occasionally undergo programmed death. However, a common property observed in many of these biological processes is cell deformation, which is essentially a dynamic change in cell shape. Based on mechanical principles, these shape changes have been broken down as either a contraction or elongation of the cell boundary. Cell boundary contraction has been extensively studied, and is driven by contraction of a network of protein filaments within the cell. The two major components of this contractile network are actin, a structural protein that forms long filaments or cables, and myosin II, a motor protein that binds to actin and uses energy to slide the actin filaments past each other. Known as actomyosin, this network is responsible for generating contractile force in cells.

In order to answer this question, MBI researchers Associate Professor Yusuke Toyama, who is the Principal Investigator of the research, and Dr Yusuke Hara, together with Mr Murat Shagirov, who was formerly a researcher at the Institute, used live embryo imaging and laser surgery to probe cell boundaries in the developing fruit fly embryo, a model system which has many similarities to mammalian development. The researchers focused their investigation on a patch of about 200 polygon shaped cells called the amnioserosa, which "zip up" to seal the embryo. The dynamic deformations that amnioserosa cells undergo make them an ideal choice for studying cell shape changes.

Careful observation and computational analysis of the amnioserosa revealed that cells underwent rhythmic changes in both area (growing and shrinking in size), and also in boundary length (becoming longer and shorter). However, these two processes were not synchronised as might be expected - i.e. a cell increasing in area was not necessarily undergoing elongation of all of its boundaries. This complication prompted the scientists to examine the distribution of myosin II across the amnioserosa. This led to the discovery that there was an increase in myosin II in the cells next to the cell undergoing boundary elongation. By disrupting the myosin II in these neighbouring cells with a laser, cell boundary elongation was terminated. This demonstrated that myosin II in neighbouring cells actively elongates the cell boundary via pulling of the boundary ends, much like stretching a rubber band with your fingers. 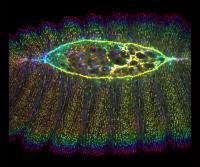